Lashing back against President Trump’s executive orders on refugees and responding to pressure from progressives rallying nationwide, a growing number of Democrats are promising to throw wrenches in the White House’s agenda, gum up the legislative process and hold back Cabinet nominees.

Senator Chuck Schumer, the Democratic leader in the Senate, has vowed to block any Supreme Court nominee President Trump puts forward that is not “mainstream,” and he doubled down on that commitment on Monday, adding that he would vote against eight of Trump’s Cabinet nominees.

On Monday afternoon, Senator Dianne Feinstein introduced legislation that would block Trump’s executive order that halted the entrance of refugees into the country. And later in the day, House minority leader Nancy Pelosi, Schumer and dozens of Democrats gathered on the steps of the Supreme Court to protest Trump’s halt on refugees entering the country.

“The lady in the harbor in the city in which I live holds a wonderful torch,” Schumer told a scrum of cameras. “We will not let this evil order extinguish that great torch.”

The increased opposition from congressional Democrats comes after Trump issued an executive order halting refugees from certain Muslim-majority countries from entering the U.S. A week after millions of women and progressives marched across the country, and days after thousands demonstrated at airports where refugees had been detained, Democrats in Congress are increasingly watching their base.

It was an abrupt shift. Democratic leaders promised shortly after Trump’s victory that they would oppose a Trump agenda when they disagreed with the President, but they also said they were willing to work with Trump when they found common ground.

There have been few similar overtures in recent days, and opposition to Trump among members has hardened.

“I’m prepared to use every tool that we have to stop a nominee” to the Supreme Court, said Connecticut Senator Richard Blumenthal. “This [executive] order is so beyond the pale, has caused such confusion, fear and chaos that it has really changed the way people think about the Trump Administration.”

Still, there are limits to how far Democrats would go. Merkley is the only Democrat who has publicly committed to filibustering any Trump nominee — the President is expected to announce his nominee Tuesday evening — and most Democrats say they will wait until then when they hear who it is. Merkley told TIME on Monday night that he did not confer with Democratic leadership before saying he would take a stand, and it is unclear whether top Democrats support his effort.

It is nearly unprecedented for the Senate to filibuster a Supreme Court nominee, though Democrats attempted to block Supreme Court Justice Samuel Alito in 2006. But many Democrats are sour over Republicans’ efforts to block Judge Merrick Garland from getting a hearing last year. “This was a stolen seat,” Merkley said again on Monday evening.

Progressive activists are exerting extraordinary pressure on Democrats to block every Trump proposal they oppose. Schumer has faced blowback for supporting Trump’s national-security nominees. Even Massachusetts Senator Elizabeth Warren, a liberal firebrand, angered progressives when she announced last week that she would vote to confirm Ben Carson as Secretary of Housing and Urban Development.

After spending a weekend at press conferences and rallies in New York, Schumer said on Monday he would vote against Representative Tom Price for Secretary of Health and Human Services, Scott Pruitt for Administrator of the Environmental Protection Agency, Andy Puzder for Labor Secretary, Steve Mnuchin for Treasury Secretary and Representative Mick Mulvaney for Budget Director. He has already said he will oppose Betsy DeVos as Education Secretary, Rex Tillerson as Secretary of State, and Jeff Sessions for Attorney General.

The rallies are a reminder to Democrats of the demand to resist Trump’s agenda.

At the Democrats’ rally at the Supreme Court on Monday night, hundreds of demonstrators chanted at the gathered members of Congress. “Do your job!” they shouted. “I think they need us to do this,” said Laura Neal, a Washington, D.C., resident who attended the rally with her dog. “Power needs to come from us.”

Members have taken notice. “It reinforces the idea that there are millions of Americans who want a more hopeful, more positive politics in Washington, and who reject a politics of division and misogyny and frankly of hatred,” said Delaware Senator Chris Coons last week.

They run the risk, however, of appearing to be obstructionist to moderate voters. By February 2009, the Senate had confirmed 11 Obama nominees; this year, due to Democratic resistance, the Senate has confirmed just two, along with CIA director Mike Pompeo and United Nations Ambassador Nikki Haley. McConnell and the Republicans have accused Democrats of denying Trump his Cabinet for political reasons.

Under Senate majority leader Harry Reid, Democrats eliminated the filibuster for Cabinet nominees and judicial appointments, meaning that today Trump needs just 51 votes to confirm his appointees. That means Democrats have limited leverage in opposing Trump. The Supreme Court nomination is one of the few places Democrats can take a stand.

Trump took to Twitter on Monday night to express his frustration with Democrats’ backlash. “The Democrats are delaying my Cabinet picks for purely political reasons,” Trump wrote. “They have nothing going but to obstruct.” 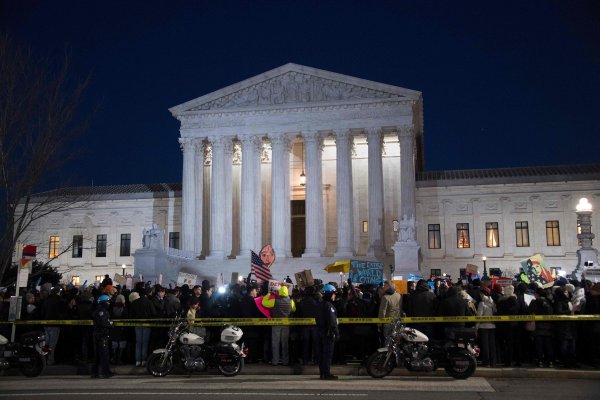