It was the latest in the long and sometimes troubled relationship Trump has with other famous people, who have appeared on his reality show The Apprentice and tangled with him on political issues.

See what 50 celebrities had to say about Trump’s immigration ban below.

Rapper Nicki Minaj referenced her own immigration from Trinidad in a tweet.

Blackish star Yara Shahidi shared that the concern touched her on a personal and global level.

Silicon Valley star and comedian Kumail Nanjiani, who was born in Pakistan, shared his concern that the ban would encourage hateful attitudes.

Director Ava DuVernay pointed out that Asghar Farhadi, an Iranian director nominated for an Oscar at this year’s Academy Awards, would be unable to travel to the ceremony under the immigration ban.

Musician Kirk Franklin emphasized that religious freedom was related to other civil liberties.

Actor Mindy Kaling referenced her book, where she details her parents’ experience as immigrants.

Grey’s Anatomy‘s Jesse Williams pointed out that many of the country’s accomplishments were due to immigrants and refugees.

Musician Sia told her followers that she would match their donations to the ACLU up to $100k.

Actor Rosie O’Donnell pledged to match Sia’s donation to the ACLU in turn.

Pop star Miley Cyrus pledged her support to immigrants in the country.

Musician Bruce Springsteen called America a “nation of immigrants” during a concert.

Pop star Rihanna, who was born in Barbados, candidly shared her thoughts on the matter via Twitter.

Moonlight and Hidden Figures star Mahershala Ali used his Screen Actors Guild acceptance speech to speak out against the persecution of communities.

Meanwhile, the stars of How to Get Away With Murder took to LAX to protest.

Actor Alyssa Milano pointed out that the immigration ban can affect everyone on a very personal level.

Singer and actor Barbra Streisand urged her followers to consider the determining factors in the immigration ban.

Author J.K. Rowling weighed in with her own thoughts on Trump’s meeting with Theresa May.

Actor Jessica Chastain pointed out that the history of the country has hinged on immigration.

While actor Nick Offerman didn’t mince his words while expressing how he felt about the immigration ban.

Actor Mark Hamill used a single hashtag to show his feelings about the matter.

Veep‘s Julia Louis-Dreyfus used her acceptance speech at the SAG Awards as a platform for immigrants.

Fresh Off the Boat star Constance Wu took to Twitter to voice her opinion on the detainment of green card holders at airports.

The Tipping Point author Malcom Gladwell relayed his own experience as an immigrant, post-immigration ban.

Model Chrissy Teigen has long been an outspoken critic of Trump and this occasion was no exception.

Singer Cher showed her support of the protests about the immigration ban.

Fun. musician Jack Antonoff made a donation to the ACLU to support those affected by Trump’s executive orders.

This Is Us‘ Mandy Moore thanked the ACLU and protestors for the work that they did.

Actor Mark Ruffalo tweeted about the many protests at airports across America.

And actor Olivia Wilde showed her support for the protestors.

Director Michael Moore offered apologies to those primarily affected by the immigration ban.

While Designated Survivor‘s Kal Penn chose to take the high road towards an Internet hater.

Happy Days star Scott Baio had alternative thoughts when it came to the issue.

In a now-deleted Instagram post, rapper Azealia Banks appeared to say she wanted Rihanna to “shut up and sit down” after the latter appeared to tweet her disapproval about Donald Trump’s immigration ban, according to People.

Actor Jennifer Lawrence wrote on Facebook that “someone’s race and religion should never keep them in harm’s way.”

Actor Seth Rogen shared his family’s story immigrating to the U.S. from Russia.

Hidden Figures and Moonlight star Janelle Monae put her money where her mouth was. 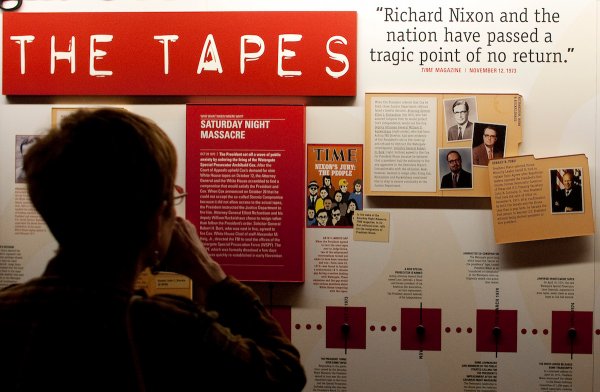