Your Dog May Soon Get the Flu Vaccine Too

Every year when flu season rolls around, we’re reminded to get our annual flu vaccine. One day soon, veterinarians may be reminding their canine patients to do the same. Researchers at the University of Rochester School of Medicine and Dentistry have developed two new vaccines for dog flu, a common illness in man’s best friend.

These inoculations wouldn’t just protect our pets, say the researchers; they could also guard against the possibility of dogs transmitting dangerous flu strains to humans, as well.

The new vaccines, which would be given to dogs intranasally (like the FluMist vaccine for humans), have so far only been tested in mice. In a new study published in the Journal of Virology, researchers showed that the formula was safe and effective at preventing lab mice from being infected with H3N8 influenza, a common flu strain in dogs.

The next step, says co-author Luis Martinez-Sobrido, associate professor in the department of microbiology and immunology, is to perform clinical trials on dogs. If these prove successful, the researchers would look for a company interested in producing and marketing the vaccine.

There is currently a flu shot on the market for dogs, but it’s made with an inactive form of the virus. Martinez-Sobrido says it provides only short-term, limited coverage, and requires two injections several weeks apart—which can be painful for dogs and inconvenient for owners. The American Veterinary Medical Association considers the influenza vaccine a “lifestyle vaccine” and does not recommend it for every dog.

Martinez-Sobrido’s new vaccine, on the other hand, is a live-attenuated formula—meaning it’s made from live virus dampened down so it can’t cause the flu. Only one dose, and no injection, is needed. In lab tests on dog cells and in mice, the new vaccine has also been more effective at activating immune protection than the currently available versions.

“Nobody, including dogs, like needles,” he says. “We think that one dose of intranasal administration would be more convenient and comfortable for dogs, so it’s an advantage we want to highlight.” Other common vaccines for dogs are available in intranasal formulas; side effects can include sneezing and nasal discharge.

Health.com: This Is What It’s Like to Have an ‘Invisible’ Autoimmune Disease

Just as with human flu vaccines, Martinez-Sobrido says his canine flu vaccine could be updated annually to guard against new virus mutations. His team’s goal is for flu vaccination to be a routine, annual part of a dog’s care.

Canine influenza is usually mild in dogs, and its symptoms are generally similar to those of human flu: lethargy, loss of appetite, coughing, and sneezing. There are no documented cases of a dog passing the flu to a human, but experts say it’s possible.

In recent years, dangerous strains of swine and avian flu have been passed from animals to humans. Last month in New York City, a veterinarian caught a strain of bird flu from an infected cat.

“Dogs are great companion animals, and we’re in much closer contact with them than we are with birds or swines,” says Martinez-Sobrido. “It could be a matter of time before a dog’s virus is able to transmit to humans.”

Health.com: It Took Doctors 30 Years to Diagnose my Autoimmune Disease

If dogs are infected with multiple strains of canine flu, they can serve as mixing vessels and generate a new strain that could more easily jump between species, says Martinez-Sobrido. “And because we don’t have any immunity,” he adds, “it could spread very widely and cause an epidemic.”

The researchers hope their vaccine will eventually be used to curb the spread of dog flu in shelters and kennels, and to protect beloved pets as well as their owners.

“Hopefully we will not only be able to prevent the virus in dogs, but actually eradicate it completely,” he says. “If all dogs got vaccinated, we could make the virus disappear.” 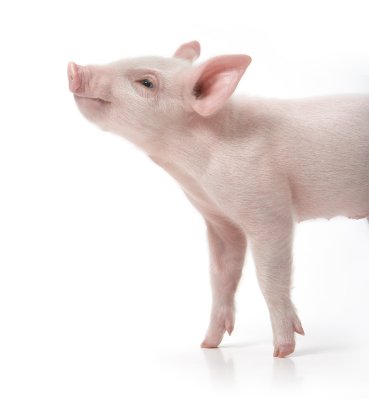 Human Muscle Cells Are Growing Inside of a Pig
Next Up: Editor's Pick