They’re definitely not in the Upside-Down: The Stranger Things cast won the SAG Award Sunday night for Outstanding Performance by an Ensemble in a Drama Series, and one of their own used it to make a big statement about acceptance and the power of storytelling.

The actor went on to thank Netflix and the show’s crew before alluding to the hostile political climate. “In light of all that’s going on in the world today, it’s difficult to celebrate the already celebrated Stranger Things,” he said, “but this award from you, who take your craft seriously and earnestly believe like me that great acting can change the world, is a call to arms from our fellow craftsmen and women to go deeper, and through our art to battle against fear, self-centeredness, and exclusivity of our predominantly narcissistic culture, and through our craft to cultivate a more empathetic and understanding society by revealing intimate truths that serve as a forceful reminder to folks that when they feel broken, and afraid and tired, they are not alone.”

After the audience showered him with applause, Harbour continued: “We are united, in that we are all human beings and we are all together on this horrible, painful, joyous, exciting, and mysterious ride that is being alive. Now, as we act in the continuing narrative of Stranger Things, we 1983 mid-Westerners will repel bullies. We will shelter freaks and outcasts, those who have no home. We will get past the lies. We will hunt monsters. And when we are lost amidst the hypocrisy and the casual violence of certain individuals and institutions, we will, as per Chief Jim Hopper, punch some people in the face when they seek to destroy.”

Harbour said the cast would carry out their mission “with soul, with heart, with joy,” adding, “We thank you for this responsibility.”

The breakout Netflix drama began with the disappearance of a little boy (Noah Schnapp) in a small Indiana town in the 1980s, an incident that leads the townspeople (and his pint-sized friends) to uncover a government conspiracy involving a little girl named Eleven (Brown) and — avert your eyes! — a terrifying monster.

The plot and tone of the show evoked the films of the ’70s and ’80s, a quality creators Matt and Ross Duffer acknowledged in their first blog entry for EW in July. “We grew up particularly obsessed with the movies of Steven Spielberg and John Carpenter, as well as the novels of Stephen King,” they wrote. “Although their stories have a wide range of tones, we think they share something essential in common: They all explore that magical point where the ordinary meets the extraordinary.” 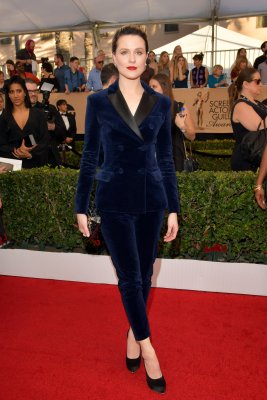 Evan Rachel Wood Rocks a Suit at the SAG Awards
Next Up: Editor's Pick