The Screen Actors Guild Awards are given by actors to their peers, so depending on how you look at them, they are either a glitzy self-congratulatory pat on the back, or the most honest award around as artists recognize the best in their field. This year, though, the show blended Hollywood glamour with political outrage. The show started with Scandal star Kerry Washington preemptively defending the right of Hollywood stars to speak up. “A lot of people are saying right now that actors shouldn’t express their opinions when it comes to politics,” she said. “But the truth is, actors are activists no matter what, because we embody the worth and humanity of all people.”

Her words were seconded by Ashton Kutcher, who opened the show. “Good evening, fellow SAG-AFTRA members and everyone at home — and everyone in airports that belong in my America,” Kutcher said to resounding applause. “You are a part of the fabric of who we are, and we love you and we welcome you.” The issue is particularly personal for Kutcher, whose wife, the actress Mila Kunis came to the U.S. from Ukraine on a refugee visa when she was seven.

Here are the best, worst and wildest moments of the 2017 SAG Awards.

Most Should-Have-Known-Better Moment: Kutcher has sat through enough awards show by now that he should know that it’s not Julia Louise-Dreyfus, but Lou-ee-Dreyfus. Yet he miffed it when he announced her as the winner for her work in Veep.

Best Impersonation: Louis-Dreyfus proved her acting chops by using her acceptance speech to deliver a spot-on impersonation of President Trump. “Whether the Russians did or did not hack the voting of tonight’s SAG Awards, I look out on the million or probably even a million and a half people in this room and I say this award is legitimate and I won,” Louis-Dreyfus said. “I’m the winner. The winner is me. Landslide!”

Louis-Dreyfus, who is the daughter of an immigrant who fled Nazi-occupied France, took the time to read the WGA statement issued earlier on Sunday and condemning the “immigrant ban”.

Best Slow Burn: William H. Macy had some stiff competition in the category of Outstanding Male Performance in a Comedy, as his work in Shameless was going up against Transparent’s Jeffrey Tambor, Black-ish’s Anthony Anderson, and more, so it was a bit of surprise when he took the prize. “I’m shocked,” he said. “Probably not as shocked as Jeffrey, but still shocked.” To his credit, Tambor laughed harder than anyone else.

Best Back-Handed Compliment: In his acceptance speech, Macy went against the grain and thanked President Trump “for making Frank Gallagher seem so normal.”

Best Self-Inflicted Burn: The kids from Stranger Things introduced the nominees for Best Ensemble in a Comedy Series. “Bunch of nerds in retro t-shirts,” said Gaten Matarazzo, waiting a beat before adding, “That’s the Big Bang Theory not us.”

Best Taylor Swift Surprise Faces: Orange is the New Black took the Ensemble prize for the third year in a row, but when the award was announced the entire cast looked genuinely shocked. Good acting, people!

Most Tear-Jerking Speech: In collecting her prize for her stunning performance in Fences, Viola Davis thanked writer August Wilson for his play. “What August did so beautifully is he honored the average man, who happened to be a man of color,” she said. “And sometimes we don’t have to shake the world and move the world and create anything that is going to be in the history book. The fact that we breathed and lived a life and was a god to our children, just that, means that we have a story and it deserves to be told.”

Best Stick-It-To-The-Man Moment: When encouraged by Viggo Mortenson and Kathryn Hah, the cast of Captain Fantastic stood up and shouted, “Stick it to the, man!”

Most Personal Speech: When Mahershala Ali took the Supporting Actor prize for Moonlight he drew a line between the film, where he played a drug dealer that helps a kid who is bullied for his sexuality, explaining that persecuted people fall into themselves and we must tell them that they matter. He then noted that his mother is an ordained minister, while he converted to Islam. “We love each other, the love is grown, the other stuff is minutia,” he said.

Best SAG Date: Sarah Paulson brought the real life Marcia Clark with her to the awards show, so the lawyer was there to watch Paulson win the award for her performance as Clark in The People vs O.J. Simpson: American Crime Story.

Best Historical Perspective: Bryan Cranston took home the SAG award for his performance as Lyndon B. Johnson in All the Way and because he had inhabited the world of LBJ for so long, Cranston had some insight into what Johnson would say to Donald Trump. “36 would put his arm around 45 and whisper in his ear,” said Cranston. “Just don’t piss in the soup that all of us got to eat.”

Most Heartbreaking Reunion: Dolly Parton burst onto the stage with an exuberant, “Greetings from Dollywood!” and a joke about “her double Ds.” She was there to celebrate her 9 to 5 co-star Lily Tomlin who was receiving the Lifetime Achievement Award. Parton was supposed to be joined by Jane Fonda for a 9 to 5 reunion, but Fonda got sick and was unable to attend, so there was no reunion. “We should do a follow up sequel to 9 to 5,” said Parton. “We better get after it or we’ll have to call it 95.” Parton hinted that the thwarted reunion might happen later when she stopped by Fonda’s and Tomlin’s show Grace and Frankie.

Best Timing: “The Doomsday Clock was moved up to two minutes to midnight, so this award came just in the nick of time,” said Tomlin, upon accepting her Lifetime Achievement Award.

Best Advice: Tomlin claims that she reached the age where people ask her advice. “Don’t leave the house when you’re drunk,” she said, later adding to the list, “Don’t worry about missing opportunities, because behind every failure is an opportunity someone wishes they had missed.”

Best Call-Back: As John Lithgow accepted his award for The Crown his final bit of gratitude was slyly political: “To an underrated actress who somehow managed to speak my exact thoughts in another awards show three weeks ago and that’s Meryl Streep.” Streep gave a heartfelt speech at the Golden Globes, calling out Trump.

Best Subtle Act of Resistance: Iranian-American actress Alia Shawkat took the stage with Steven Yeun and said two little words that said a lot more: “Salaam Alaikum,” or peace be with you.

Best Shipper Speech: For anyone who ships The Crown’s Queen Elizabeth and Prince Philip, in her acceptance speech Claire Foy gave a special shout-out to Matt Smith, saying he was not only “really spontaneous, exciting and incredibly talented actor,” but also her “friend.” And then, as Queen Elizabeth, she told Prince Philip, “Thank you for making this job a joy and for making me laugh. I love you.” Foy’s married in real life, but don’t let that stop you from dreaming.

Most Impassioned Speech: It was a surprise when Stranger Things won for Outstanding Performance by an Ensemble (besting Game of Thrones and Downton Abbey), but David K. Harbour came prepared with a serious speech delivered passionately: “As we act in the continuing narrative of Stranger Things, we 1983 Midwesterners will repel bullies. We will shelter freaks and outcasts, those who have no home. We will get past the lies. We will hunt monsters. And when we are at a loss amidst the hypocrisy and casual violence of certain individuals and institutions, we will, as per Chief Jim Hopper, punch some people in the face when they seek to destroy what we have envisioned for ourselves and the marginalized. And we will do it all with soul, with heart, and with joy. We thank you for this responsibility!”

Best Reaction: Winona Ryder had no idea what to make of Harbor’s speech and let it all play out on her face. Her face will be nominated for outstanding performance next year.

Best Reunion: When Jonah Hill announced that Emma Stone had won for her performance in La La Land, it meant that the SAG Award stage briefly turned into a Superbad reunion, as the two friends gave each other some McLovin. Then Stone got in a fight with the teleprompter when it told her to “please wrap up” and added to the fact that she is a mere mortal who feels “insecure sometimes.” Way to bum out Emma Stone, teleprompter.

Most Humble Speech: Like Emma Stone, Denzel Washington is just a human, and sometimes he feels insecure, so he seemed genuinely surprised to have won Best Actor for his performance in Fences. “I’m a God-fearing man, I’m supposed to have faith, but I didn’t have faith,” he said of not preparing a speech. “I’m getting choked up!”

Most Uniting Speech: Hidden Figures may have won the SAG Award for outstanding performance by a cast in a motion picture, but star Taraji P. Henson took the prize with her speech. “This story is about what happens when we put our differences aside, and we come together as a human race, we win,” Henson said. “Love wins every time.” 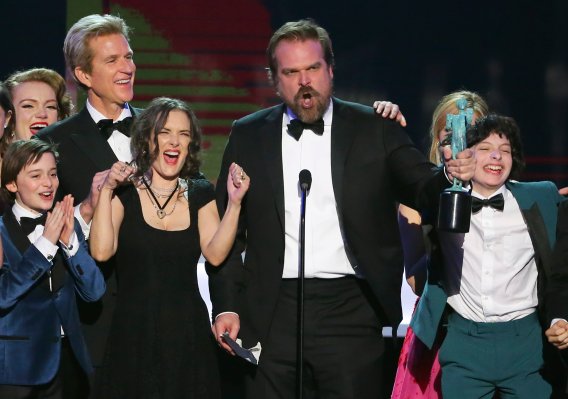