Eman Mohammed, a respected Palestinian photojournalist and TED Talk speaker, has been forced to cancel plans to jury the World Press Photo photojournalism contest in Amsterdam, after President Donald Trump signed an executive order that places restrictions on travel for citizens of seven Middle Eastern countries.

Even though Mohammed is a legal permanent resident of the U.S. and she does not come from one of the seven countries listed in the order, she has been advised by her lawyers that, as a Palestinian, “the confusion surrounding the U.S. government’s executive order means she risks being unable to return to her family if she comes to Amsterdam,” reads a statement from World Press Photo. “We joined with her lawyer and advised her not to travel,” the statement continues. “We are angered and saddened that bigotry has prevented this talented member of the photojournalism community from joining us this week.”

For the longest time, I’ve believed my backstory was my heritage, something I’ve been familiar with and very proud of. That backstory slowly shifted through the past year, while the political climate kept on swinging. I started re-editing the details depending on the listener. Sometimes I would neglect stating that my two daughters are American Muslims and I’m the immigrant in the family. Occasionally, I needed to emphasis that, ‘No, they don’t have any other nationality and, no, we didn’t win the green card lottery.’ They just happen to be Americans with a Muslim faith and an immigrant mother. It’s no one’s fault. It’s just life.

I’ve become an expert in reading people’s faces, but it became harder as the political speech became filled with hateful accusations and paranoid statements. I’ve trained myself into taking the baby steps towards our American dream, as our family shared what could have been the best way to describe the American family, which is being a former refugee, current immigrant and a citizen. This felt balanced and historically accurate until Mr. Trump called it terrorism and shock our world to the core.

I’ve been taking pride in how I’ve shielded my daughters from what I call the “Trump Effect.” I started to think that motherhood was getting easier thanks to my close, warm circle of American friends of different colors and ethnicities. Their positivity was still enough to make us hopeful despite the election’s dramatic results, because they could see the differences and embrace them.

All up until now, I’ve been distracting the girls with the fun we will have on our short trip to Amsterdam, where I was invited as a photojournalist to judge the World Press Photo award. It was a great honor I wouldn’t have imagined attending while I was still living back home in Gaza under siege, surrounded by closed borders. Not a day has passed without reminding myself of how fortunate I am to live with such a privilege. I’ve tasted what it’s like to be besieged and freedom-less.

My daughters looked forward to being on a plane. But that flight is what made me, as a mother, nervous. I was worried someone wouldn’t like the use of my other language, or maybe our darker skin. The surreal decisions President Trump has made in his first week at the White House amplified those fears. There were no words that could silence the restlessness I felt about this trip under the new president’s rule.

On Thursday morning, after a long night struggling with those silent worries, I emailed a devoted immigration lawyer I’ve known, who by the nature of the situation quickly became a friend. I explained my fears.

The lawyer answered with her own list of questions. After multiple calls and emails, we agreed that it wasn’t going to be a pleasant situation at the immigration and customs desk but that if I answered all of the officers’ questions on my way back from Amsterdam, that would do it.

On Friday night, I continued packing. That’s when the breaking news alert came, confirming my worst fears: The president had just banned travelers from seven countries from entering the U.S. I scrolled to find the list of countries and sighed with a pathetic and unfair sense of relief when I saw that “Palestine” wasn’t among those countries. Yet, I still struggled with the decision, expressing my concerns to my boyfriend, whose frustration for what the country is turning into got him to book a flight just to accompany my family through the return’s horrifying moments. He smiled nervously while confirming the flight and I thought to myself that I was overreacting.

But, a few hours later, my lawyer called again, expressing her reservations against my travel plans. I asked how I could possibly be subjected to the ban since I’m Palestinian and she explained that my country, according to the U.S., isn’t a country but an occupied territory. How could have I forgotten? After all, this is what I struggle to explain to airline agents every time I book a ticket myself.

Yet, that wasn’t the worst news. Not only would I probably be detained and questioned, but my two daughters could be taken away from me, the lawyer told me.

The news was simply devastating. Being a photojournalist and a mother had never been a question of priorities. Until now.

This incident only shows that President Trump’s ban is actually targeting innocent civilian families, breaking them apart. This might be the victory he had been seeking all along: he filled our life with fear, made our days longer and much harder to get through, divided our nation and demanded of us to pick sides.

But, my freedom wasn’t given to me on a silver platter. I earned it. And in the eyes of the law, I remain a legal U.S. resident while the President’s ban isn’t.

Eman Mohammed is an award-winning photojournalist and TED fellow based in Washington. 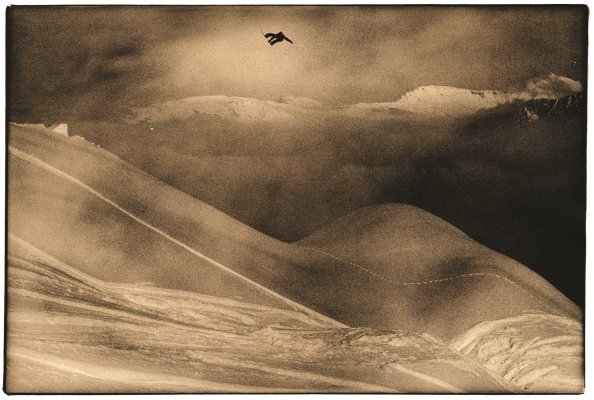