President Trump walks along the West Wing Colonnade on his way to the Oval Office at the White House, on Jan. 26, 2017.
Drew Angerer—Getty Images
By Zeke J Miller

Responding to confusion and outcry over President Donald Trump’s executive order Friday suspending the U.S. refugee program and banning travelers from seven countries, the White House heaped praise on U.S. bureaucrats for their swift implementation of the order.

The Friday order suspends the U.S. refugee assistance program for 120 days and bans visa entries from Iraq, Syria, Sudan, Iran, Somalia, Yemen, and Libya unless a case-by-case waiver is granted for 90 days. Several people covered by the order were detained on arrival in the U.S. late Friday and early Saturday, while others were removed from airplanes overseas. Reports of confusion among the traveling public abounded over the weekend, as the White House provided little explanation for the highly-technical order Friday night.

Speaking to reporters Saturday, a senior administration official defended the secrecy and surprise surrounding the order’s implementation, arguing that by more fully informing the traveling public, air carriers and ports of entry about the order would have made it easy for those seeking to circumvent it to enter the U.S. Businesses, universities and aid organizations were reportedly left scrambling to rebook travel plans and provide assistance to those stranded overseas by the order.

“Everyone who needed to know was informed,” a the official said.

“This White House conveys its deepest appreciation to everyone involved in the implementation of this order, and that’s been formally conveyed to the managers of both State and Homeland Security,” the official said. The official added that the Trump administration had been working on the order and its implementation for “many weeks” during the transition process, including consultation with State Department and Homeland Security officials.

But even as the administration boasts of the order’s swift execution, there were key details left unfinished, including formalizing the exemptions rules and requirements for the waivers. The official noted that the State Department was also still in the process of defining what “in transit” means for the purpose of the order’s “undue hardship” exception for refugees who had been approved to enter the U.S. — for instance, a refugee temporarily residing in a third country en route to the U.S. The official added that the Department of Homeland Security and Customs and Border Protection were in the process of finalizing that and other guidance to be released later Saturday.

According to the official, U.S. green card holders from one of the affected countries currently abroad will need to apply for a waiver before being allowed to return to the U.S. The precise process for obtaining the waiver was still being finalized Saturday by the State Department. Green card holders from those countries currently in the U.S. would be required to meet with a consular officer before departing the country, the official added.

Trump’s order also requires the departments of State and Homeland Security as well as the FBI, to develop a comprehensive immigration screening program, to include increased in-person interviews, databases to cross-check documentation for fraud, and assessments of potential immigrants’ likelihood of “becoming a positively contributing member of society and the applicant’s ability to make contributions to the national interest.” It also requires a “mechanism” to assess whether applicants have intent to commit criminal or terrorist attacks in the U.S. This, the administration says, fulfills Trump’s promise for “extreme vetting” of potential entrants to the U.S.

The official did not rule out the possibility that more countries would be subjected to the rigorous visa restrictions after an agency review process is completed in the coming months.

Officials pushed back on the characterization of the visa ban as a “Muslim ban,” which then-candidate Trump floated in late 2015, listing the Muslim-majority countries that are not subject to the order.

Responding to a lawsuit filed early Saturday on behalf of two men detained at John F. Kennedy International Airport in New York under the executive order, the official stated, “it’s important to keep in mind that no person living or residing overseas has a right to entry to the U.S.” The official added that they had been told by the acting director of U.S. Customs and Border Protection that one man had already been granted a waiver to enter the U.S. and that the other waiver was in process.

“We’re dealing with a relatively small universe of people,” the official adding, calling it “astonishing” how little disruption has occurred. “It went exactly as it should have gone.”

After the U.S. order was released, the government of Iran announced plans to take reciprocal steps against U.S. travelers. The official stated that the administration was aware of Iran’s intentions, adding that if it is indeed reciprocal, Iran would make case-by-case exceptions for individual American travelers. 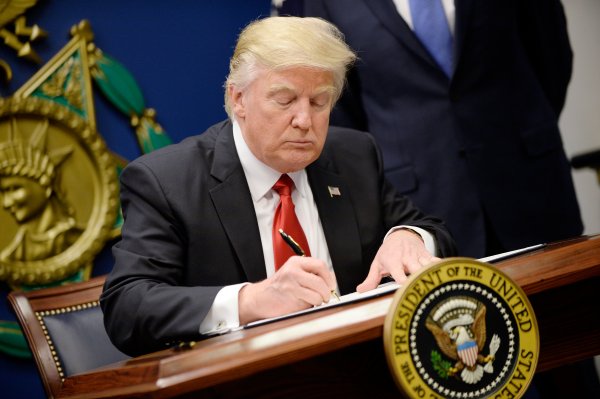