Inside Mike Pence's Private Meeting with March for Life Leaders

Thursday evening, Vice President Mike Pence invited a group of March for Life leaders and allies to the White House for a last minute, private reception.

It was informal, almost familial—the thirty people gathered in Pence’s ceremonial office in the Eisenhower Executive Office Building have known one another for years, all working together to fight America’s abortion policies. For many, the moment was emotional, and as they greeted one another, they shared a running joke: “How long it has it been since you have been in here?”

For about an hour, over petit fours and coffee, they celebrated their success in getting this Administration to the White House and their hope that policy will turn in their favor.

“That was a first for me for sure,” Jeanne Mancini, president of the March for Life, says. “I’ve met the vice president before, but I thought I would have to remind him of my name.” Instead, Pence knew exactly who she was, and he recognized her and others to thank them for their work.

Trump advisor Kellyanne Conway joined, as did Pence’s wife Karen and their daughter Charlotte. Other groups represented included Susan B. Anthony’s List, the Knights of Columbus, Students for Life, Care Net, Heartbeat International and Focus on the Family, Mancini says. Pence told the group how his calling to public office, she adds, “had to do with respect for the human person, helping to protect life” and that now “he is grateful to come to this position to continue to serve in that capacity and to have more influence.”

The moment, on the eve of the 43rd March for Life, was another sign that the anti-abortion movement’s political strength has reached its highest level since Roe v. Wade. On Friday, Pence, who has spoken to the group before, will join the march in person as vice president. Until now, no sitting vice president or president has ever attended. President Trump was expected to call the group via phone, as did presidents Ronald Reagan and both presidents Bush. Conway will also speak.

“The fact that the Vice President of the United States is supporting the March for life is deeply meaningful,” says Charmaine Yoest, senior fellow at American Values, who was also present Thursday evening. “We began the week with the President reinstating the Mexico City policy, the next day the House passed a measure to make Hyde Amendment permanent, and now the week ends with the vice president speaking to the March for Life, and then looking forward to the president naming his Supreme Court nominee next week, it is a remarkable start to this Administration.”

For Trump, the alliance is politically expedient. Social conservatives, especially white evangelicals, overwhelmingly helped to put him in office. Naming Pence as his vice president, with his longtime ties to the anti-abortion movement, was a key moment that solidified that merger, as was Trump’s public promise to name a specifically “pro-life” nominee to the Supreme Court. Trump plans to announce his nominee for the Supreme Court on Feb. 2, the same day as the National Prayer Breakfast.

For Mancini, comparisons with last week’s Women’s March, which was perhaps the largest single-day protest in American history, are apples to oranges. Organizers introduced the March on Friday as the “largest annual civil rights demonstration in the world.”

“We are 44 years strong,” Mancini says. “We have been marching in rain, sleet, snow, and sun. There was a blizzard last year and we marched. Three years ago we had subzero temperatures. And we marched.”

The March for Life has united its supporters over time in one specific purpose, to come to Washington on the anniversary of the Roe decision to fight it. The Women’s March represented a wide range of protests, from climate change to gay rights to black lives matter to protesting Trump’s commitment to defund Planned Parenthood.

“The March for Life while insistent, is not a singular burst of energy,” Marjorie Dannenfelser, president of the Susan B. Anthony List, says. “It is a consistent and persistent insistence that our government live up to our nation’s promises to the vulnerable and those who live in the shadows. Pro-life power in the White House and in the Congress is an outward sign of the strength and integrity of the pro-life movement.” 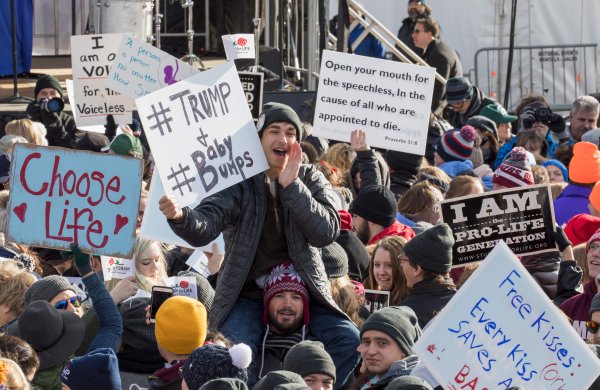 Watch Anti-Abortion Activists Take Part in the March for Life
Next Up: Editor's Pick