Not Everyone in the U.K. Is Overjoyed About May's Meeting with Trump

The U.K. government’s eagerness to seal a lucrative post-Brexit trade deal with the U.S. may obscure an unpleasant truth for President Donald Trump: many people in the nation of his mother’s birth despise him and everything he stands for.

Prime Minister Theresa May will be the first world leader to meet Trump as president on Friday. May and her allies are pragmatists, who view the building of a relationship with the President to be in Britain’s overall interests. Closer economic ties with the U.S. could be essential for when the U.K. leaves the European Union and membership of its single market, which is worth about 4% to its economy.

But, back at home, there is anger — particularly among the left — at what some view as the government cosying up to a figure who has, in their view, legitimized racism and sexism ever since running for office. They do not believe, as May said yesterday, that “opposites attract” in the world of politics.

That anger could be seen on the streets of London on Jan. 21, as 100,000 marched as part of the global ‘Women’s March’ movement, supported by such diverse groups as the Campaign for Nuclear Disarmament, Greenpeace, Oxfam GB, Solidarity with Refugees, and Black Pride. As in the U.S. marches, many held anti-Trump signs and effigies of the President.

“There’s a huge amount of anger in the U.K. at the reality of what is now a President Trump,” says Caroline Lucas, co-leader of the U.K’s Green Party. “He’s already starting to tear up climate change agreements. The women’s march was anti-Trump and anti his values – British people, for example, wanted to stand up for the Mexicans on the other side of his wall.”

“The British population are horrified by Trump for his aggressive loose cannon tendencies and their view of him as a dictator in American caricature form,” says Dr Mike Galsworthy, co-founder of Scientists for E.U., which also backed the marches.

The Women’s March was primarily about the effect Trump’s policies could have on women, of course, and many at the London march were focused on access to healthcare for women. Although the campaign to defund Planned Parenthood is being driven by the Republican-led Congress, one of Trump’s first acts was an aggressive expansion of the global gag rule on abortions, to apply to every health organization that receives U.S. government funding. If abortion is even mentioned by, for example, an organization that treats HIV/Aids in Africa, they risk losing all their U.S. state funding.

“He threatens the essential freedoms of women,” Sophie Walker, leader of the Women’s Equality Party, tells TIME. “He wants to curtail reproductive health, which denies women’s rights over their bodies – a fundamental human right.”

The ascent of a President widely accused of sexism and misogyny ensures women will remain second class citizens, Walker adds. “He’s normalising misogyny … at a time in Britain where a similar right-wing populism could be emboldened by Trump’s actions. Theresa May needs to raise all this with Donald Trump when she goes and talks to him. There’s no point being a woman in a powerful position if it doesn’t produce opportunities for other women.”

Activists and labor unions fear a Trump presidency will turn up the volume on the kinds of xenophobic and anti-immigration rhetoric that flourished during the campaign to leave the E.U. Malia Bouattia, president of the National Union of Students and a black Muslim, says: “Trump’s policies threaten every aspect of my identity, and the identity of thousands of students across the U.K. Since Brexit we’ve seen hate crime rise in the U.K, and the election of Trump gives further validation to a culture of hate across the world.”

Others simply fear a deal with Trump’s White House will not work out well for Britain. Len McCluskey, general secretary of the U.K.’s biggest labor union, Unite, says “bi-lateral [trade agreements] negotiated with an ‘America First’ president” will not be in the country’s best interests. “It is hard to see what the U.K. can secure from Donald Trump without paying a heavy price in our safety standards, living standards, and, I fear, our National Health Service which has long been a target of the voracious U.S. private healthcare providers. The Prime Minister must proceed with extreme caution.”

May does receive some surprise sympathy from an old political foe: Alastair Campbell, who was press secretary to Labour Party Prime Minister Tony Blair, says the Prime Minister is stuck between a rock and a hard place on Trump. “It’s a difficult position to be in. Trump’s a president that most people find appalling,” he tells TIME. “But a Prime Minister has a responsibility to have good relations with the U.S. My worry is that she’ll be so desperate to do a deal that she won’t have the ability to stand up for our values.” 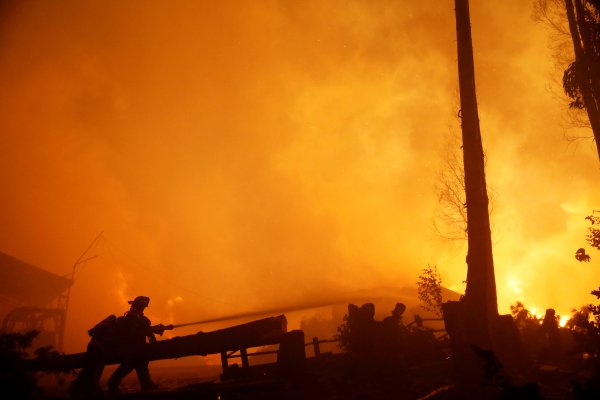 Chile's Worst Wildfires Reduce An Entire Town to Ashes
Next Up: Editor's Pick