Firefighters try to stop a fire as the worst wildfires in Chile's modern history ravage wide swaths of the country, in Santa Olga, Chile Jan. 26, 2017.
Rodrigo Garrido—Reuters
By Joseph Hincks

Most of Santa Olga’s residents were safely evacuated, but rescuers recovered one body from the ruins and two people have been reported missing.

“What we have experienced here is literally like Dante’s Inferno,” Carlos Valenzuela, the mayor of the nearby city of Constitución, told the Guardian. “We were recovering after the last earthquake, but this tragedy has messed up everything,” Valenzuela added.

At least seven people, including four firefighters, have died in more than 90 forest fires that have blazed across central and southern Chile in recent weeks, according to local media. Some 238,000 hectares of forest has been burnt across the country, the National Forest Corporation said, leading to the evacuation of at least 4,000 people.

Santa Olga, which was destroyed by a forest fire, on Jan. 26, 2017.
Martin Bernetti—AFP/Getty Images

Chile’s President Michelle Bachelet has declared a state of emergency and called for international help to stymie the wildfires. According to the Associated Press, the U.S. has sent a Boeing 747-400 “Super Tanker” help fight the fires. 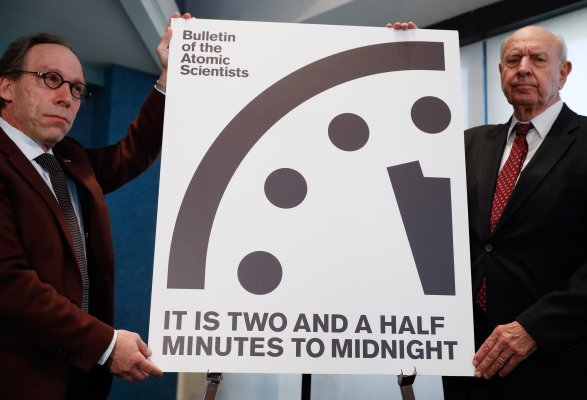 Why Doomsday Is Closer Than You Think
Next Up: Editor's Pick