President Donald Trump’s counselor Kellyanne Conway has not only watched Kate McKinnon’s impressions of her on Saturday Night Live, she has some notes for the comedian about her delivery.

In an interview with The Hollywood Reporter, Conway offered this suggestion to McKinnon.

“Make her be a little bit more happy,” she said. “I’m known for being much more happy than maybe the character sometimes is. I liked the ‘Walking on Sunshine.’ The ‘Kellyanne Conway’s Day Off.‘ That was much more me.”

Conway who recently staunchly defended Sean Spicer after he falsely called the crowds at Trump’s swearing-in ceremony “the largest audience to ever witness an inauguration, period, both in person and around the globe” as “alternative facts” also added that she thinks that the show’s recent sketches about her post-election is an astute observation of the times.

“Kate McKinnon clearly sees the road to the future runs through me and not Hillary,” she said.

Saturday Night Live’s most recent sketch portraying Conway was a Roxie Hart-esque number that referenced her calling Trump’s comments on Ted Cruz and John Kasich “unpresidential” on CNN before taking on the role of managing his campaign.

Read the full interview at The Hollywood Reporter here. 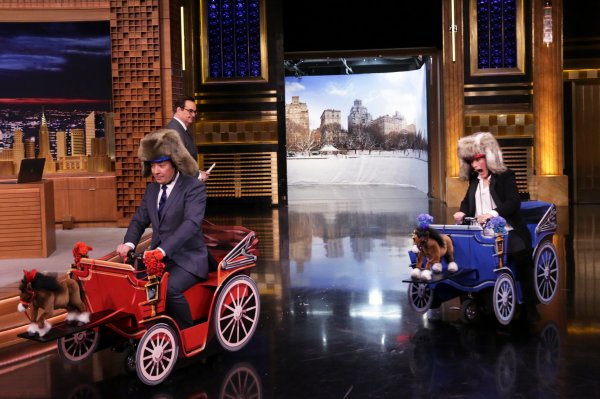 Jimmy Fallon and Glenn Close Redefined Transportation Goals With This Carriage Race
Next Up: Editor's Pick