President Donald Trump’s border wall with Mexico will have an initial price tag of between $12 billion and $15 billion, according to Congressional Republican leaders, but the method of paying for Trump’s promised project is still not settled.

At the Congressional Republican Retreat in Philadelphia on Thursday, House Speaker Paul Ryan said the wall would cost up to $15 billion, more than the $8 billion Trump has estimated the wall will cost.

Trump vowed on the campaign trail to make Mexico pay for the wall, but Mexican President Enrique Peña Nieto insisted on Wednesday that Mexico would never pay for the wall. In an interview Wednesday night with ABC, Trump repeated his claim that Mexico would reimburse the U.S. “Ultimately it’ll come out of what’s happening with Mexico,” Trump said. “It will be in a form, perhaps a complicated form.”

Speaker Ryan did not respond to a shouted question about offsetting the cost of the wall in the federal budget. “We are fiscal conservatives,” Ryan said. “If we are going to be spending on things, say infrastructure, we are going to find the fiscal space to pay for that in our spring budget.”

Trump signed two executive orders on Wednesday directing the construction of the border wall and increasing the number of immigration enforcement officers carrying out deportation, as well as border patrol forces. 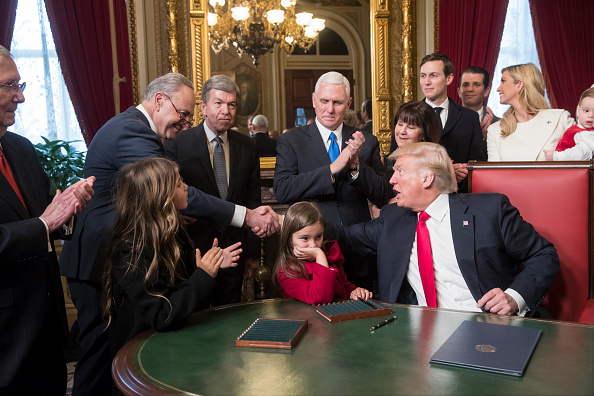 Democrats Are Trying to Divide Trump From the GOP
Next Up: Editor's Pick