Theresa May to Say the U.S.-U.K. Relationship 'Made the Modern World.'

Theresa May, the British Prime Minister, is to call for the U.S. and U.K. to “lead, together, again” on the first stop in a U.S. visit, as she prepares to meet with President Donald Trump.

May will make a speech to the congressional Republican retreat in Philadelphia on Tuesday, attempting to emphasise the ‘special relationship’ between the U.S. and U.K. by saying that the two countries have worked together in the past to “defeat evil” and “open up the world.” A day later, she will become the first world leader to hold talks with the President, the U.K. State Department said.

May is thought to be eager to secure a trade deal with the U.S. having recently announced a plan for Britain’s exit from the European Union, in a speech that focused on global opportunities. She will repeat this sentiment in Philadelphia, saying that the U.K. is “a great, global nation.”

Trump expressed support for ‘Brexit’ during the campaign and likened his own little-predicted victory to that of the campaign to leave the European Union. He raised eyebrows when he was photographed alongside Nigel Farage, a prominent voice in the U.K.’s Brexit campaign, before meeting May.

The Prime Minister will travel to Washington and meet President Trump for talks in the Oval Office on Friday. She will gift the newly-inaugurated President a “quaich,” a Scottish cup symbolising friendship. 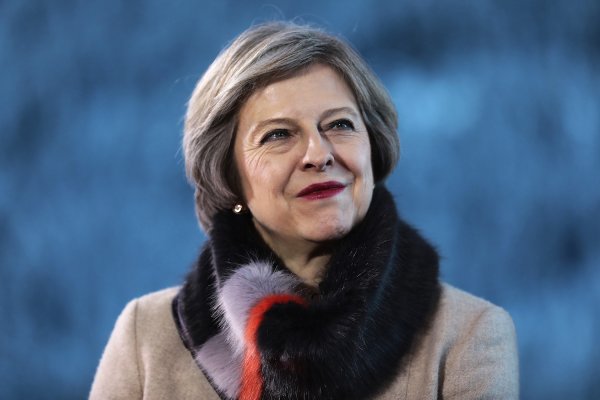 Britain's Theresa May Is All-In on Brexit With Lousy Cards
Next Up: Editor's Pick