How President Trump Is Trampling Precedent

The old Washington adage of “Watch what we do, not what we say” is hard to apply to someone as serially outrageous as Donald Trump. But for all his untethered pronouncements about voter fraud and crowd size and media bias, it was President Trump’s brisk succession of executive actions that probably defined the opening of his presidency.

Small-government conservatives have deplored the use and overuse of Executive Orders since the Clinton era, but Trump has figured out at least this much about the office he now holds: if you want to do anything quickly in Washington, you have to do it yourself.

And so he set about building a wall, restarting pipelines, killing trade deals and targeting so-called sanctuary cities and Obamacare.

Overall, the momentum was the message. Trump met with CEOs to talk about jobs and with Detroit automakers to talk about onshoring factories and touted upcoming visits from the leaders of the U.K., Israel and Mexico. And perhaps nothing signaled that Washington had a new boss like his decision on Jan. 23 to remove the U.S. from the Trans-Pacific Partnership, a 12-nation free-trade pact that the U.S. had championed through years of negotiation.

Here is a more detailed rundown:

On Jan. 20, Trump signed an Executive Order that takes aim at the Affordable Care Act by directing federal agencies to begin preparing to unwind the law. That move comes as complaints about rising premiums and out-of-pocket deductibles have put the law under more intense scrutiny. But if Republicans on Capitol Hill are keen to repeal the law in its entirety, they aren’t anywhere close to agreement about what, if anything, to replace it with. That may take years.

On Jan. 25, Trump signed an Executive Order shifting federal funds to pay for the construction of a border wall, which he predicted would begin within “months.” There’s still no sign that Trump can coax Mexico into footing the bill eventually, though he has scheduled a Jan. 31 meeting with President Enrique Peña Nieto. Trump has also directed the Department of Homeland Security to find ways to cut off federal grants to cities that harbor immigrants in the country illegally, as he promised during the campaign, and to speed up deportations of people in the U.S. without legal status. But his aides have signaled that a plan for dealing with young people who are in the U.S. illegally is low on his agenda. He is also set to sign a temporary ban on most refugee resettlement in the U.S. and a block on any new visas for citizens of some Muslim-majority nations like Syria and Iraq.

With cameras clicking, Trump signed documents effectively killing a massive Pacific trade deal–a key campaign promise–and rebooted plans for a pair of oil and gas pipelines that his predecessor shelved amid environmentalists’ opposition. He met with the Big Three automakers to press them on domestic manufacturing, as well as union chiefs and workers. Trump again advised companies against moving production overseas, warning that he could institute a border tax. (Republicans at the Capitol have other ideas.) Trump reiterated his pledge to renegotiate NAFTA after he meets with Peña Nieto and Canadian Prime Minister Justin Trudeau.

Like previous Republican Presidents, Trump reinstated the so-called Mexico City policy, which prevents foreign-aid groups that receive U.S. assistance from promoting, let alone providing, abortions. He also promised to announce on Feb. 2 his nominee to the Supreme Court, who he has vowed will support overturning Roe v. Wade. And Kellyanne Conway, a key aide, is set to meet with antiabortion demonstrators when they march on Washington on Jan. 27.

On some matters, Trump has heeded established diplomatic norms. He invited the Prime Minister of the post-Brexit U.K., Theresa May, to be the first foreign leader to visit the White House. And he appears to be backing off a campaign promise to move the U.S. embassy in Israel from Tel Aviv to Jerusalem, a gambit that could further upend troubled Middle East peace talks. Yet in other ways he veered sharply off the course set by President Obama. The White House declined to condemn new Israeli settlements on the West Bank, a frequent target of his predecessor. A spokesman said the U.S. was now open to teaming up with Russia in the fight against ISIS. The Trump Administration vowed to stop China from accessing islands in the international waters of the South China Sea, a move that inflamed Beijing. And Trump is reportedly considering a directive to reauthorize “black site” prisons overseas where enemy combatants were tortured during the George W. Bush Administration and won’t rule out bringing back such aggressive interrogation tactics as waterboarding. 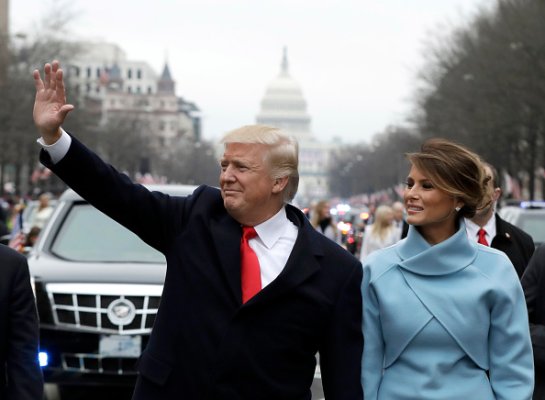 Trump Can Thank the Arts for His Wealth
Next Up: Editor's Pick