Hundreds of people attend an evening rally at Washington Square Park in support of Muslims, immigrants and against the building of a wall along the Mexican border on January 25, 2017 in New York City. (Spencer Platt--Getty Images)
Spencer Platt—Getty Images
By Charlotte Alter

The demonstration, led by the New York Chapter of the Center for American-Islamic Relations (CAIR) was hastily organized in response to Trump’s executive orders restricting immigration from Muslim countries and efforts to curb undocumented immigration within the U.S. On Wednesday, Trump green-lighted the construction of a wall along the southern border, ordered the Department of Homeland Security to build more detention centers, and ended federal grant funding to so-called “sanctuary cities” that refuse to cooperate with federal anti-immigration efforts.

The demonstration, in Washington Square Park, was both a rally in support of undocumented immigrants and Muslim refugees and a protest against Trump. It was also a test of whether the fragile coalition of activists who marched all over the country in the Women’s March last weekend could maintain their unity in the long run.

“I think the Women’s March was a giant wake-up call,” says Celine Robinson, a 27-year-old writer in New York City who attended Wednesday’s protest. “What am I doing standing up there if I’m not standing up here?”

Read More: What to Know About President Trump’s Immigration Orders

Many of the attendees at the Wednesday protest said they had also attended the Women’s March on Saturday. Massage therapist Jennifer Landry, 47, said coming to this demonstration is “the only thing that feels like we’re doing something.” Her 3-year-old daughter played patty-cake with other children to a new song they had learned: “Hey hey, ho ho, Donald Trump has got to go.”

Edna Bonhomme, a socialist organizer and PhD student, said she was encouraged by the turnout at both the Women’s March and the Washington Square Park demonstration. “Now you have a broader layer of people who are protesting that might not have come out to previous protests,” she says. She is not a Muslim or an immigrant, but, she says, “We all stand with Muslims against hate.”

Still, some of the black protesters in the crowd on Wednesday questioned the motivations of the demonstrators who were newer to social-justice activism. “There’s a lot of white folk here, and while that’s really dope, a lot of them look like they’re just passing by,” says Toni Wilson, a social-work student. “It looks like ‘Look at me, I support you,’ not ‘Look at me, I’ll get in the trenches with you.'”

Wilson’s friend Ramelcy Uribe, a youth organizer, says she’s skeptical of white female protesters who didn’t take to the streets until Trump started mouthing off about sexual assault. “Folks did not feel pressured to show up for other folks until they were specifically threatened,” she says. “I don’t think cis white women feel like they need to show up to protest until the threat of sexual assault named them.”

“I don’t know if it’s really solidarity or if it appears to be solidarity,” she added.

For Robinson, the rally in defense of immigrants and Muslims is just the second of many, many protests she plans to attend throughout the Trump Administration. “I think I will show up to all the rallies and protests I hear about rather than be selective. We can’t afford to be selective,” she says.

The Women’s March, she says, gave her marching orders. “I think it helped me to see that there are allies that I didn’t expect, but it reminded me that I need to be a better ally to Black Lives Matter and other causes,” she says.

“A lot of white women were called on their white feminism, and I’m grateful for it.” 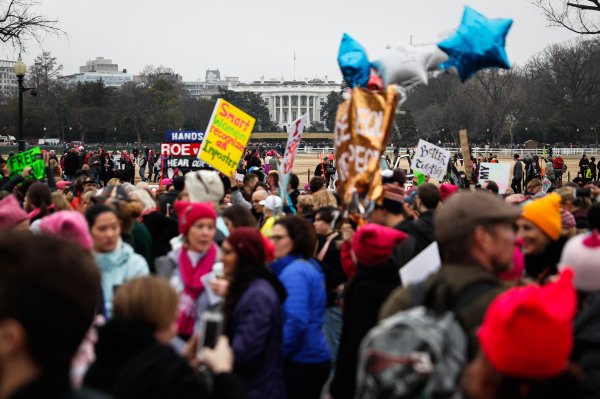 See Just How Big Over 200 Women’s Marches Were All Across the Country
Next Up: Editor's Pick