Donald Trump began his first extended sit-down interview as President by saying the job had changed him already. But he spent the rest of the interview displaying all the same traits he displayed as a presidential candidate. He doubled and even tripled down on controversial statements, attacked his critics, made claims based on things unnamed sources had told him, argued the election was rigged, and went after the news media.

In the interview with ABC’s David Muir, Trump acknowledged that his words have greater meaning now that he’s been sworn-in as President, but he unapologetically hewed to many of his campaign talking points and assertions — at times without foundation.

Here are some of the highlights from the interview:

On people brought to the U.S. illegally as children, Trump hinted at a forthcoming policy announcement to provide them a path to legal status.

Trump continued to dispute reports that the crowd size for his Inauguration didn’t match President Barack Obama’s, saying he was elected to ensure his supporters are not forgotten.

On getting the nuclear “biscuit” — a plastic card containing his authentication codes to launch a nuclear strike — shortly after his swearing-in, Trump remarked

He meanwhile reaffirmed that he believes in an unsubstantiated theory that 3 million to 5 million people voted illegally, and blamed members of Congress for leaking it to the press.

He claimed that of those alleged millions of illegal votes, for which there is no evidence, not one went to him.

Calling out a surge of murder and other crime in Chicago, he defended his Tweet suggesting he’d send in federal forces.

Trump reaffirmed his personal opinion that waterboarding and other forms of torture are effective, but said he would listen to his Secretary of Defense and not push for their return — for now.

On the impact of his considered proposals to limit immigration from some Muslim-majority countries and to suspend the U.S. refugee program, Trump argued it couldn’t exacerbate tensions in the Muslim community, because they’re already so high. 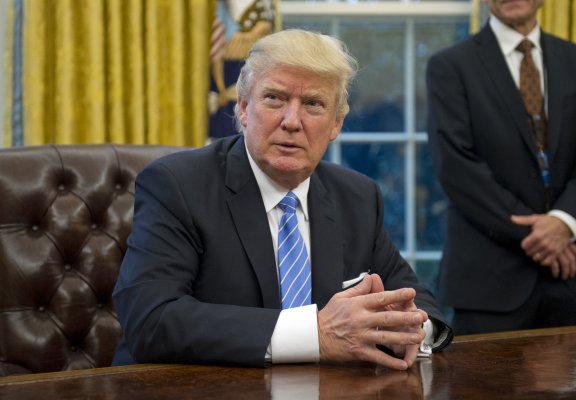 Trump’s Wall Coming in ‘Months'
Next Up: Editor's Pick