Mary Tyler Moore, the actress best known for her pioneering 1970s sitcom The Mary Tyler Moore Show, has died, according to a spokesperson. She was 80.

Though no cause of death has been reported yet, Moore had suffered from various ailments in recent years, including heart and kidney problems and vision loss. She underwent brain surgery in 2011 to remove a benign tumor, and her health woes were exacerbated by the toll of Type 1 diabetes, a diagnosis she received in her early 30s.

“Today, beloved icon, Mary Tyler Moore, passed away at the age of 80 in the company of friends and her loving husband of over 33 years, Dr. S. Robert Levine,” said longtime rep Mara Buxbaum in a statement. “A groundbreaking actress, producer, and passionate advocate for the Juvenile Diabetes Research Foundation, Mary will be remembered as a fearless visionary who turned the world on with her smile.”

Born in Brooklyn, New York on Dec. 29, 1936 to a homemaker mother and a clerk father, Moore (her given name) grew up the oldest child of three, living in Queens until the family relocated to Los Angeles when she was 8. She acted and danced throughout her Catholic-school upbringing, and by the time she reached her teenage years, she had set her sights on a career as a performer.

Though she would come to be known for her acting, Moore’s first foray into show business was as a dancer. At 17, she landed a gig as Happy Hotpoint, a spritely dancing elf, in a series of appliance commercials that aired during the popular Ozzie and Harriet show. In 1959, she booked her first regular TV role on the drama Richard Prince, Private Detective, as an enigmatic receptionist whose onscreen appearances were limited to the sound of her voice and shots of her legs beneath a desk.

But her big break would come two years later, when Carl Reiner cast her as Laura Petrie, the lead female role in The Dick Van Dyke Show. Laura played Van Dyke’s wife and a young mother, like Moore, who married her first husband Richard Meeker at 18 and gave birth to their son Richard, Jr. at 19. Fresh-faced and charming, Laura helped win Moore a following—and an Emmy—so that by the time The Dick Van Dyke Show ended its run in 1966, she was primed for her next big move.

Building on the momentum of Van Dyke, Moore and her second husband, Grant Tinker (who she had married after divorcing Meeker in 1961), formed the production company MTM Enterprises and developed a pitch for a sitcom in which she would play the lead. The Mary Tyler Moore Show aired its first episode on Sept. 19, 1970, and would run for seven seasons, cementing Moore’s status as a pioneer for women on television. MTM would go on to produce several of its spin-offs in addition to series like The Bob Newhart Show and St. Elsewhere.

5 of the Best The Mary Tyler Moore Show Moments

Celebrities Mourn Mary Tyler Moore's Death: 'I Throw My Hat Up in the Air For You'

As Mary Richards, a single woman in her 30s working as an associate producer at the Minneapolis news station WJM-TV, Moore became the first never-married career woman to carry her own TV series. A spiritual predecessor to shows like Sex and the City, Girls and 30 Rock, The Mary Tyler Moore Show normalized the notion that a half-hour sitcom—or any show, for that matter—could find both its drama and its humor in female friendship, the pursuit of a career, office relationships and even a sex life (if only alluded to implicitly).

With the women’s liberation movement increasing in volume offscreen, the show became a forum for conversations about marriage and birth control and the pursuit of higher education. Mary’s friend and neighbor, Rhoda Morgenstern (Valerie Harper, who would get her own spin-off), was a New York Jew. Her boss (Ed Asner, who would also get a spin-off) was divorced. And behind the scenes, its writers room boasted greater gender balance than any of its forebears or contemporaries, with 25 of its 75 writers, in 1973, women.

Offscreen, Moore’s relationship to the feminist movement was less straightforward. She publicly disagreed with feminist leader Gloria Steinem, who in turn criticized Moore for her lack of support. She disagreed with Steinem’s view, for example, that women owe it to themselves to have a career. Though Moore would dedicate time and energy to charitable causes like diabetes awareness and animal rights, her contributions to women’s advancement were arguably greater onscreen than off of it.

Moore continued to work in television until a few years ago. Efforts to capitalize on the success of The Mary Tyler Moore Show with musical variety shows in the late 1970s were met with poor ratings, as were two of her short-lived series in the mid-1980s, Mary and Annie McGuire. Guest spots on sitcoms included stints on Ellen and The Ellen Show, That ‘70s Show and Hot in Cleveland, which reunited her with Betty White for the first time since they appeared together on The Mary Tyler Moore Show. Nothing would find the fervor enjoyed by her own show, which held the record for most Emmys, with 20, until Frasier broke it in 2002.

Moore also worked onstage and on the big screen, most notably earning a Tony in 1980 for playing a paralyzed sculptor in Whose Life Is It Anyway? and an Oscar nomination in 1981 for her portrayal of a grieving mother in Ordinary People. Sadly, the role mirrored Moore’s real life, as her son Richard Jr. died at the age of 24, in 1980, when he accidentally shot himself in the head while handling a sawed-off shotgun.

She also wrote two memoirs. Her first, After All, published in 1995, discussed her longstanding struggles with alcoholism. Her second, Growing Up Again: Life, Loves, and Oh Yeah, Diabetes, focused on her decades-long illness, which was also the basis for much of her charity work. Moore served for many years as the International Chair of JDRF, formerly known as the Juvenile Diabetes Research Foundation, working to fundraise and increase awareness of type 1 diabetes. In 2007, the organization created a research initiative in her honor, “Forever Moore,” with a focus on advancing the development of new treatments and technologies.

Moore married for a third time, to cardiologist Robert Levine in 1983, with whom she remained until her death. She is remembered with a statue in Minneapolis—tossing her hat in the air as Mary Richards did in the credits to her signature show—lunchbox in hand, megawatt smile, eyes glancing toward the sky. 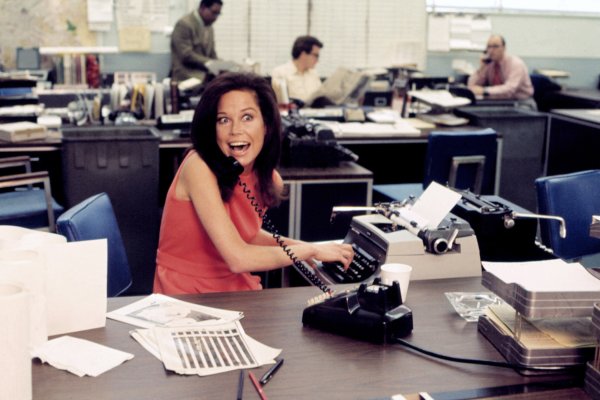