Pope Francis greets US actor and former governor of California Arnold Schwarzenegger during his weekly audience at the Paul VI Hall on Jan. 25, 2017 in Vatican City, Vatican.
Franco Origlia—Getty Images
By Zamira Rahim

Schwarzenegger has been promoting his NGO, “R20 – Regions of Climate Action” which helps sub-national governments around the world develop low carbon projects, Vatican Radio reports. Schwarzenegger showed Pope Francis some of the NGO’s work in a brief exchange.

Schwarzenegger, who rose to fame as a bodybuilder and actor, had previously met Pope John Paul II. He tweeted a picture of the meeting and called the Pope a “a true leader for the Church.”

Schwarzenegger recently inherited a role as the face of The New Celebrity Apprentice from President Donald Trump — who quickly taunted him on Twitter after his ratings didn’t live up to when Trump hosted the show. 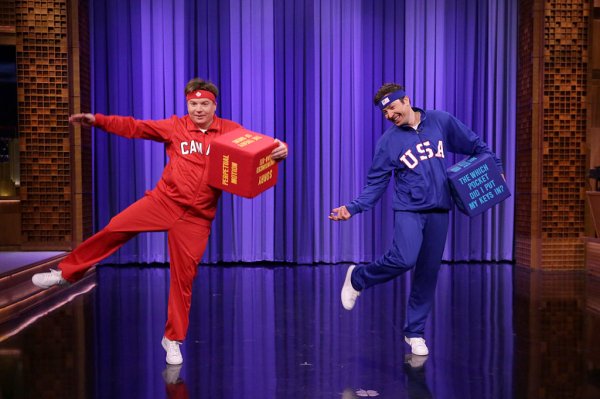 Jimmy Fallon Had an Epic Dance Battle With Mike Meyers
Next Up: Editor's Pick