Mikhail Gorbachev: 'It All Looks as if the World Is Preparing for War'

The world today is overwhelmed with problems. Policymakers seem to be confused and at a loss.

But no problem is more urgent today than the militarization of politics and the new arms race. Stopping and reversing this ruinous race must be our top priority.

The current situation is too dangerous.

More troops, tanks and armored personnel carriers are being brought to Europe. NATO and Russian forces and weapons that used to be deployed at a distance are now placed closer to each other, as if to shoot point-blank.

While state budgets are struggling to fund people’s essential social needs, military spending is growing. Money is easily found for sophisticated weapons whose destructive power is comparable to that of the weapons of mass destruction; for submarines whose single salvo is capable of devastating half a continent; for missile defense systems that undermine strategic stability.

Politicians and military leaders sound increasingly belligerent and defense doctrines more dangerous. Commentators and TV personalities are joining the bellicose chorus. It all looks as if the world is preparing for war.

It could have been different

In the second half of the 1980s, together with the U.S., we launched a process of reducing nuclear weapons and lowering the nuclear threat. By now, as Russia and the U.S. reported to the Non-proliferation Treaty Review Conference, 80% of the nuclear weapons accumulated during the years of the Cold War have been decommissioned and destroyed. No one’s security has been diminished, and the danger of nuclear war starting as a result of technical failure or accident has been reduced.

This was made possible, above all, by the awareness of the leaders of major nuclear powers that nuclear war is unacceptable.

In November 1985, at the first summit in Geneva, the leaders of the Soviet Union and the U.S. declared: Nuclear war cannot be won and must never be fought. Our two nations will not seek military superiority. This statement was met with a sigh of relief worldwide.

I recall a Politburo meeting in 1986 at which the defense doctrine was discussed. The proposed draft contained the following language: “Respond to attack with all available means.” Members of the politburo objected to this formula. All agreed that nuclear weapons must serve only one purpose: preventing war. And the ultimate goal should be a world without nuclear weapons.

Breaking out of the vicious circle

Today, however, the nuclear threat once again seems real. Relations between the great powers have been going from bad to worse for several years now. The advocates for arms build-up and the military-industrial complex are rubbing their hands.

We must break out of this situation. We need to resume political dialogue aiming at joint decisions and joint action.

There is a view that the dialogue should focus on fighting terrorism. This is indeed an important, urgent task. But, as a core of a normal relationship and eventually partnership, it is not enough.

The focus should once again be on preventing war, phasing out the arms race, and reducing weapons arsenals. The goal should be to agree, not just on nuclear weapons levels and ceilings, but also on missile defense and strategic stability.

In modern world, wars must be outlawed, because none of the global problems we are facing can be resolved by war — not poverty, nor the environment, migration, population growth, or shortages of resources.

I urge the members of the U.N. Security Council — the body that bears primary responsibility for international peace and security — to take the first step. Specifically, I propose that a Security Council meeting at the level of heads of state adopt a resolution stating that nuclear war is unacceptable and must never be fought.

I think the initiative to adopt such a resolution should come from Donald Trump and Vladimir Putin — the Presidents of two nations that hold over 90% of the world’s nuclear arsenals and therefore bear a special responsibility.

President Franklin D. Roosevelt once said that one of the main freedoms is freedom from fear. Today, the burden of fear and the stress of bearing it is felt by millions of people, and the main reason for it is militarism, armed conflicts, the arms race, and the nuclear Sword of Damocles. Ridding the world of this fear means making people freer. This should become a common goal. Many other problems would then be easier to resolve.

The time to decide and act is now.

Most Popular on TIME
1
What the Freemasons Taught the World About Secrecy
2
Why the U.S. Is Losing the War On COVID-19
3
Was The Wizard of Oz Cursed? The Truth Behind the Dark Stories About the Judy Garland Classic 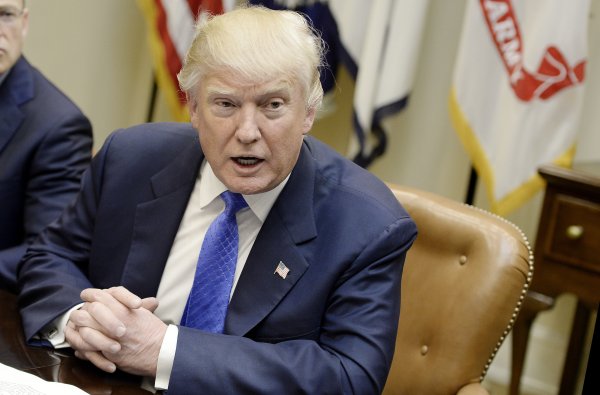 Trump Wants U.S. Nuclear Arsenal to Be 'Top of the Pack'
EDIT POST