Theresa May and Donald Trump and 5 Other 'Special Relationships'

U.K. Prime Minister Theresa May will become the first world leader to meet with U.S. President Donald Trump on Friday, after telling lawmakers at the annual congressional Republican Retreat that she hopes to “renew the special relationship for this new age.”

The term ‘special relationship’ was coined by Winston Churchill in his ‘Sinews of Peace’ address at Missouri’s Westminster College in 1946. There, he said both countries had a “fraternal association of the English-speaking peoples.”

This relationship has turned into a cornerstone of British foreign policy. Historian Anthony Seldon, who is currently writing a book on the bond entitled Special, tells TIME that the two countries have been intimately bound together over the past century by shared history, government structures, ideals and defense cooperation. “It is the norm to be close,” Seldon says, “and it happens because of the overlap of three set of factors: a common enemy, personal chemistry and common ideological outlook.”

The importance of this relationship has been questioned through the years, especially as its intensity ebbed and flowed through various administrations. TIME wrote in 1970 that the special relationship did not “come even close to carrying the significance” it once had under Churchill. More recently, former U.S. President Barack Obama’s “pivot to Asia” was viewed by many as evidence of the U.S.’s shifting priorities. The affiliation with Britain was one of many relationships America had with various nation-states— it wasn’t necessarily special.

But under Trump, this might regain prominence. “Respectability is important to him [Trump], he needs her wisdom and British knowledge of intelligence and security” Seldon tells TIME. “There is a strong mutual need that will make it an important relationship. He needs the credibility on the international stage.”

The World War II leaders sustained a close and personal friendship while running their respective countries, sharing a mutual love of strong drinks and tobacco. They reportedly exchanged 1,700 letters and cables between 1939 and 1945, with Roosevelt once telegraphing Churchill, in 1942, saying: “It is great fun to be in the same decade with you.”

The U.S. was lending military assistance to the U.K. without formally entering World War Two through the Lend-Lease Act. Churchill was however keen “to get the Americans into the war,” or at least increase badly needed military aid to Britain. So in 1941, they met on a warship in Newfoundland, where both men laid out the goals for a post-war world in what became known as the Atlantic Charter.

The charter, which later became the U.N. Charter, failed to rally American public opinion to back a U.S. intervention. But that changed after the 1941 attack on Pearl Harbor by the Japanese.

This began America’s entry into the fight and two weeks after the attack, Churchill arrived for a three-week stay at the White House to help coordinate the defeat of their common enemies. There is where they shared what might be the special relationship’s most intimate moment.

According to Churchill’s stenographer, Patrick Kinna, the former Prime Minister was giving a dictation, while naked, after having emerged from the bath. “There was a rat-a-tat-tat on the door, and Churchill swung the door open to President Roosevelt,” Kinna told the BBC. Churchill apparently told Roosevelt: “You see, Mr. President, I have nothing to hide from you.”

Anglo-American relations fell to a low point in the 1950s, when these two leaders crossed paths. Eden, who had served as Foreign Secretary in three different decades, became Prime Minister in 1955 when an enfeebled Winston Churchill stepped aside.

But his career as Prime Minister was short-lived due to the 1956 Suez Crisis, when Egyptian strongman Gamal Abdel Nasser seized the canal that links the Red Sea and the Mediterranean and nationalized it. The canal was described as an important “imperial lifeline” for Britain, as it provided a short sea route to oilfields in the Persian Gulf. A secret deal was quickly struck between Britain, France and Israel to make a joint invasion of Egypt.

Eisenhower was incensed at not being informed, telling his aides: “I’ve just never seen great powers make such a complete mess and botch of things.” He pressured Eden to find a peaceful solution by refusing to allow the IMF to provide emergency loans to Britain. Eden fell to Eisenhower’s demands and forces were pulled out 21 days later.

Eden resigned soon after due to ill health. As TIME wrote in 1977:

As the Economist notes, the major lesson was that Britain would have to act in concert with America, rather than embark on solo military endeavours.

Though one was in his forties and the other in his sixties, the two leaders reinvigorated the Anglo-American relationship after the disastrous Suez Canal crisis. Macmillan had said in 1943 that Britain to the U.S. was like “the Greeks to their Romans.” The implication was that even though the Romans superseded the Greeks, they still relied on their knowledge and wisdom.

But even though they had literal blood ties (both men discovered that they were distantly related), America was not beholden to Britain — as shown in 1962 when Kennedy canceled the Skybolt missile programme the U.S had promised to sell to the U.K. in order to help them build an independent nuclear program. Americans were worried about a repeat of the Suez crisis, as well as nuclear proliferation.

TIME wrote about the Skybolt in 1962:

Kennedy nonetheless sold the U.K. Polaris nuclear missiles, but only as a part of a multilateral force with NATO.

Reagan and Thatcher struck up a famously great rapport, building a friendship that could rival Churchill and Roosevelt’s. They shared the same ideological vision, presiding over historic free-market reforms in the 80s as they sought to end the Cold War.

The former Hollywood star declared on Inauguration Day in 1981 that “government is not the solution to our problem; government is the problem,” something that resonated with the newly installed Prime Minister. Just as May is with Trump, Thatcher was the first foreign leader to visit Reagan’s White House. “The Iron Lady had found her American Romeo with an equal lust for austerity and deregulation,” TIME wrote.

The famed friendship was subject to strains. She reprimanded Reagan for the U.S. invasion of the former British territory of Grenada in 1983. In 2014, a recording of a call by Reagan, apologizing to Thatcher, was released, Reuters reports.

As TIME wrote in Thatcher’s obituary in 2013:

When Reagan died in 2004, Thatcher “draped herself across the casket at the ceremony in Washington Cathedral” her biographer Nicholas Wapshott told NBC. “This was not play acting. She was devastated by his death, almost as much as she was by the death of her own husband.”

Their relationship, while close, was not cause for celebration for many. It in fact won Blair the unflattering nickname of Bush’s “puppet” or “poodle,” due to his unwavering support of the president’s military endeavours in Afghanistan and especially Iraq. Seldon, who is also Blair’s biographer, says that while Blair did not share the same personal chemistry with Bush that Thatcher had with Reagan, they both shared a common enemy: the threat of Islamic militancy.

Blair visited the White House days after 9/11 in a show of solidarity with Bush. “The British Prime Minister has crossed an ocean to show his unity of purpose with America,” Bush said in his address to Congress and the nation on Sept. 20, 2001, TIME reports. And in 2003, both countries invaded Iraq.

It later turned out that the intelligence that formed the basis of the war was inconclusive: Iraq had not replenished its chemical and biological weapons, it was not reactivating its weapons programme and there was no alliance discovered between the deposed Iraqi leader Saddam Hussein and al-Qaeda. The decision of both leaders to start a war on flawed evidence not only drew opposition from both sides of the Atlantic, but it cost Blair his popularity among voters, and has overshadowed his legacy since he stepped down as Prime Minister in 2007.

Blair received the Presidential Medal of Freedom for that relationship in 2009:

The Chilcot Inquiry, which looked into Britain’s role in the Iraq war, revealed Blair’s attempt to keep the special relationship strong. In a note detailed in the report, Blair wrote to Bush in 2002 saying: “I will be with you, whatever.” 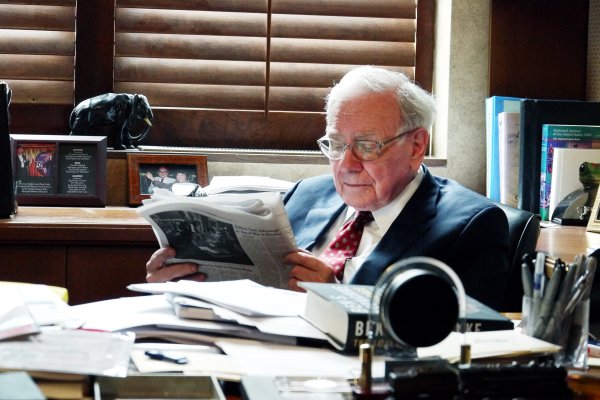 Why Warren Buffett Keeps Framed Reminders of Awful Moments in Economic History
Next Up: Editor's Pick