Nick and Danielle dance at a Chris Lane concert on 'The Bachelor'.
George Burns—ABC
By Melissa Locker

Welcome back to The Bachelor. When we last saw lovelorn hero, Nick Viall, he was looking for love at a pool party and getting straddled in a bouncy house by a bikini-clad woman. The other women were not impressed by Corinne’s use of the bouncy castle, sucking their teeth and muttering about Nick’s wifely ambitions. Vanessa tells Nick that she’s not mad, but she is disappointed. Corinne for her part simply doesn’t care. She’s here for the right reasons — getting famous enough to get a spot on Bachelor in Paradise.

The Rose Ceremony: Raven gets the first rose, followed by Taylor the therapist, Brittany, Kristina, Jasmine, Alexis the Dolphin Enthusiast, Astrid, Danielle the neo-natal nurse, Jaimi, Josephine, and finally Sarah. It’s down to the final rose and Corinne is standing there trying to telepathically remind Nick that she mere minutes ago she was straddling him in a bouncy house. Nick receives the message and gives her the rose, causing the other women to collectively roll their eyes and kick her out of their cycle sync.

After Christen, the wedding videographer who has never found love, and, um, some other girl tear up on their way out, Corinne gives a fake nice toast about what a privilege it is to be there and the women try to simultaneously ignore her and pretend they are team players.

The Bachelor Milestone: The women feign enthusiasm over traveling to a D-list destination. Case in point, Sarah screaming in delight, “Milwaukeeeeeee!”

Meet the Parents: Nick has been on the show many times, but were his parents always such hipsters? His mom is wearing a leather jacket and skinny jeans, with a nose ring, black eyeliner, and an emo boy haircut that swoops over one eye. His dad wears horn-rimmed glasses, leaving him one man-bun away from getting a job at a coffee shop in Brooklyn.

The First Date: Danielle L. goes off hand-in-hand with Nick, leaving all the women to watch the color fade from the sky as they are left stranded by the duck pond with nothing but their jealousy and 13 other women to keep them warm. Meanwhile, to the delight of the Waukesha Tourism Board, Danielle gets to explore the sights in Waukesha — including one of Nick’s ex-girlfriends who just happens to be loitering around the only coffee shop in town. They invite her to join them for coffee and she gives Danielle some insight into Nick (there may not be much to give). Then Nick and Danielle spend some time alone in an empty field and a nearly-empty pub. They talk about Nick’s first kiss and Danielle’s parents’ divorce — and oh god it’s so boring. Remember last week when Vanessa got to go barf in space? Danielle gets a rose for the severe lack of fun.

The Bachelor Milestone: To spice things up a little bit, Nick takes Danielle to slow dance on a dais at a Chris Lane concert.

Group Date: “We’re in Wisconsin and I couldn’t be happier,” said Danielle with a straight face. The women are all improperly dressed for the date, which is to a dairy farm. Despite their sartorial failings, they are all game for walking through mud in heels, save for Corinne who just wants to be in a spa being fed a taco (she may be onto something). The women feed cows, shovel manure and milk the cows, leading to statements like, “Nick haven’t you ever worked a teat before?” (He has not.) The women (not Corinne) pretend to be having fun, but it really does not look like fun. At least no one tries to make a marriage metaphor.

The Cocktail Party: The women all talk about Corinne and how immature she is, and of course she is standing right outside the door listening to it all. She tells the camera that she is not immature, proffering her bosoms as proof that she is mature, and then noting that she is a piece of delicious buttery corn. (?) She decides to confront the women and it’s almost a constructive conversation, save for the fact that Corinne doesn’t actually listen to anything they say. She then tells Nick that the girls were being mean to her and she talked to them about it and Nick ogles her chest and congratulates her on her maturity, completing the circle. Perhaps shared delusion is the basis of a strong relationship? Nick ruins their moment, though, by giving the Group Date Rose to Kristina.

The Second Date: Raven is really thrilled to wander the streets of Waukesha. He then takes her to his kid sister’s soccer practice where he works out while Raven stands around in the cold. Nick makes a few light marriage analogies and then Raven gets to meet his parents on the sidelines of his sister’s soccer game. Then they take the soccer team to a roller rink and skate with Nick’s sister to Sixpence None the Richer’s “Kiss Me”. It’s all very wholesome and sweet, but that ends at dinner when Raven tells Nick about catching her boyfriend fornicating with another woman and deciding the best course of action is to beat them about the head with a stiletto. It’s like an episode of Real Housewives of Waukesha. Nick gives Raven a rose, potentially out of fear.

The Bachelor Milestone: Hide the stilettos, ’cause Raven is falling in love with Nick.

The Cocktail Party: Danielle L. has a rose, but decides that she wants to talk to Nick first. That makes everyone else mad. The actual drama comes (once again) in the form of Corinne, who decides to confront Taylor about some perceived attitude deficiency. When Corinne sits her down, Taylor goes into full Hopkins therapist mode, which Corinne does not appreciate. The fight isn’t over but the show is … so to be continued.

The Best Contestant: Alexis the Dolphin Enthusiast needs more screen time. In her alone time with Nick she told him that her two greatest fears are Nicolas Cage and aliens, and Raven was the Girl Most Likely to Be An Alien. 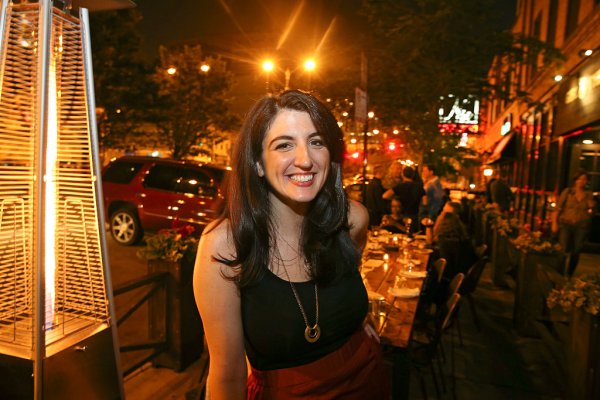