50 Years Ago This Week: Tragedy Strikes the Space Program

The story, however, is anything but calm. The three astronauts had been killed, on Jan. 27, in a routine test. The mission was later designated Apollo 1. But, as TIME explained, the everyday image of the men at work was appropriate for the tragic irony of the accident:

The magazine portrayed the deaths as a reminder that, even after more than a dozen successful space missions—including landmark missions by Grissom and White—what was going on at NASA was both highly dangerous and highly technical. As the National Air and Space Museum explains, a number of things had gone wrong that morning, and when the electrical fire began the men were unable to execute their escape procedure before they were overcome by the smoke and fire. (You can read more about what happened here.)

The deaths would raise the perpetual question when it came to space exploration: was the risk worth the rewards? One answer to that question, TIME noted, had been supplied by Gus Grissom himself, who had spoken on the topic before his untimely death.

“If we die, we want people to accept it,” he had said. “We are in a risky business, and we hope that if anything happens to us it will not delay the program. The conquest of space is worth the risk of life.””

Prescient reaction: The letters page contained a message from an engineer living in Binghamton, N.Y., who had read the previous week’s cover story about air pollution and proposed an idea that might help—something that may sound familiar to drivers of today’s hybrid cars. “One answer would be a vehicle combining a conventional internal combustion engine and an electric engine with batteries,” the engineer wrote.

A first: The death of James H. Bedford, a California psychology professor, was an unusual milestone for science. Bedford, who died of cancer, was the first person to have his body preserved by the Cryonics Society of California in case revival was later possible after a cure for cancer was discovered.

Some things do change: A story in the world news section relayed word that British Prime Minister Harold Wilson had met with Charles de Gaulle to try to convince the French President to allow Britain to enter the European Common Market, which France had previously vetoed. With the British pound in a delicate state, citizens were eager to join the other six nations of the Common Market, an event that finally took place about six years later. The Common Market would later become an element of the European Union—which Britons voted in 2016 to leave.

Strange vintage ad: This one isn’t notable for any particular old-timey sentiment or design, but the wording still stands out, assuring business owners that “now your employees don’t have to die” to benefit from insurance.

Coming up next week: A cover story about Japan 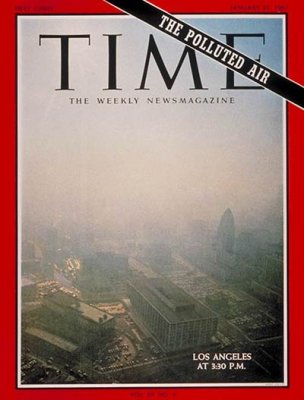 50 Years Ago This Week: Worry Over Climate Change Has Already Begun
Next Up: Editor's Pick