White House Press Secretary Sean Spicer stood by his false claim that President Donald Trump’s inauguration was the most-watched ceremony ever during his first official press briefing on Monday.

“It was the most-watched inaugural,” Spicer told reporters.

After repeated pressing from reporters, Spicer said that he never meant to say that the in-person crowd at the inauguration was the largest of all time, but stood by his assertion that the ceremony’s overall audience, including television and online was the most-watched ever.

“It was the total largest audience witnessed in person and around the globe,” he said.

Trump’s inauguration also saw lower numbers than Obama’s in television ratings—30.6 million viewers tuned in on Friday, about 18% fewer than the 38 million who watched in 2009.

Spicer on Saturday delivered a five-minute statement to the press that contained several falsehoods and claimed the audience at Trump’s inauguration was “the largest audience to ever witness an inauguration, period, both in person and around the globe.” The controversy over Spicer’s falsehoods came to a boiling point on Sunday, when Trump counselor Kellyanne Conway called the press secretary’s untrue statements “alternative facts.”

“It’s unquestionable,” Spicer said on Monday, citing audiences that streamed the inauguration online as well as people who watched it on television. “I don’t see any numbers that dispute that.” 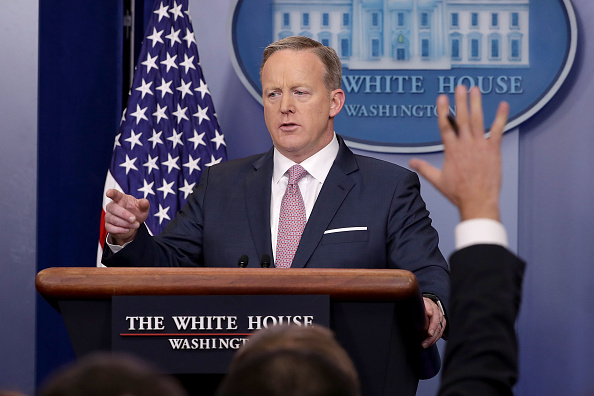 Trump's First Press Briefing Was a Big Change
Next Up: Editor's Pick