London's Women's March Was About More Than Just Donald Trump

Protesters chant as they arrive in Trafalgar Square during the Women's March in London, England, on Jan. 21, 2017.
Jack Taylor—Getty Images
By Zamira Rahim / London

Many a mock President Trump was on display at London’s Trafalgar Square on Saturday, where close to 100,000 people taking part in the Women’s March London brought the U.K. capital to a standstill, much as in cities across the U.S.

But among the anti-Trump signs were placards tackling issues that affect women here closer to home — Brexit, the U.K. Conservative Party and the British government. And the marchers had little good to say about their female Prime Minister Theresa May, who has said she identifies herself as a feminist.

“I don’t think Theresa May represents us at all,” said Amy Francombe, 19, an undergraduate at King’s College London university. “It’s pretty insulting actually that she calls herself a feminist.” Gesturing at the crowd, she added: “We actually protest for women. We won’t idly let Trump in, we won’t let people be divided.”

May announced Sunday she will meet the newly elected U.S. president this week to hold talks on trade, NATO and security issues. She has previously said that his comments about groping women are “unacceptable”, yet recently signaled that she would not raise the subject during the meeting. “When I sit down, I think the biggest statement that will be made about the role of women is the fact that I will be there as a female prime minister of the United Kingdom,” May said, after being asked about Trump’s sexism.

The Prime Minister is only the second woman to hold her position and has some claims to being a feminist — a former minister for women and equalities, she has promoted female colleagues, and during her time overseeing the British Home Office, or interior ministry, she pushed for measures against female genital mutilation (FGM) and to help women in abusive relationships. She also drew criticism, however, for overseeing the detention of pregnant women held at an immigration center.

Vocal British M.P.s who campaigned to leave the E.U. will be hoping that May’s meetings with Trump go smoothly and lead eventually to a post-Brexit trade deal and a re-affirmation of the trans-atlantic “special relationship.” Critics of Trump hope she’ll bring a different message: the Women’s March London Twitter account sent out a message on Monday encouraging protesters to contact May and urge her to reaffirm the U.K.’s commitment to human rights when meeting with Trump.

The anti-populist feeling amongst the crowd on Saturday seemed to extend far beyond the U.S. election, with Trump proving to be a lightning rod for different protesters rallying for other causes in the U.K. and surrounding countries — such as abortion rights in Ireland and British union workers rights.

“Today is pretty intersectional, it’s inclusive,” Reannon Licorish, 21, a production runner said. “We’re better here [with feminism] than the U.S. But with May…it’s one thing to call yourself a feminist and it’s a very different thing to act as one. She doesn’t exactly act like a feminist.”

“I think Theresa May just wants to calm tensions,” Monique Browne, 19, volunteering with one of the workers unions present at the march, said. The union. UNITE, which is a major funder of the opposition Labour Party, has a tense relationship with May’s government — yet Browne was sympathetic to the U.K. Prime Minister’s position. “That special relationship between the U.S.A. and the U.K. is threatened now. It’s unpredictable. But things aren’t as bad here for feminists as they are in the U.S.A. I don’t think we’ll be in the position they’re in.”

The optimism of the crowd, rallying a political left that has had a difficult year nationally and globally wasn’t present in every marching member. “How much power does May have? Does Britain really have?” Hannah Coughlan-Bos, 34, a teacher, asked. “We all feel powerless right now, so marching is the only thing we can do.” 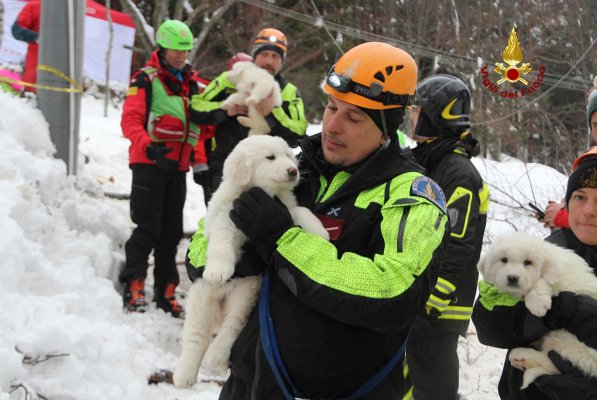 Three Sheepdog Puppies Were Found Alive After an Avalanche in Italy
Next Up: Editor's Pick