Fate of Missing Jet May Never Be Known, Officials Concede

Officials raised the possibility on Wednesday that the fate of the Malaysia Airlines plane missing for almost a month may never be determined, even as they said its disappearance is now being treated as a criminal investigation.

Malaysia Airlines Flight 370 disappeared on March 8 soon after departing Kuala Lumpur for Beijing, and subsequent analysis of data transmission indicates it eventually crashed somewhere in the southern Indian Ocean. All 239 passengers and crew are presumed lost to the chilly and tempestuous waters.

Khalid said the criminal investigation is still focused on three possibilities — hijacking, sabotage and psychological problems of anyone aboard the Boeing 777. More than 170 statements have been taken, and investigators plan to take even more, he said. All passengers on the flight have been cleared of any role in hijacking, sabotage, or having personal psychological issues that could have led to the plane’s disappearance, CNN reports.

Meanwhile, the sonar-equipped British submarine H.M.S. Tireless has joined the search team, which on Wednesday numbered 10 planes and nine ships. But without tracing any debris to an impact point, authorities are left to comb about 85,000 sq. miles (220,000 sq km) of ocean — roughly the size of Utah — some 930 miles (1,500 km) west of Perth, Australia.

Experts point to the 60 years it took to find H.M.A.S. Sydney and the 80 years to find the Titanic as an indication of the arduous task ahead. “And both of those are considerably bigger than the poor old 777,” Jason Middleton, an aviation professor at the University of New South Wales in Sydney, tells TIME. “The chances of finding it are very, very small.”

Even the largest possible floating objects, such as empty fuel tanks that have not ruptured or remain attached to heavy engines, have likely sunk by now. “They would almost certainly be on the bottom,” Middleton says. “Otherwise [anything floating] will be seat cushions and people’s sneakers.”

While the submarine will certainly boost search efforts, there is no telling how long it will stay in the area. If the flight recorder’s pinger battery dies before it is found — as with Air France Flight 447, which crashed in the Atlantic in 2009 — then searchers will have to trawl the ocean with submerged side-scan sonars looking at the ocean floor.

“But when you’re towing something which is 5 km deep, your towline is 20 km long, and you’ve got to worry about running into seamounts,” Middleton says.

Even if the black box is recovered — it took two years for Air France Flight 447 — there is no guarantee that all questions will be answered. Only information such as the heading, altitude and speed of the aircraft will almost certainly be accessible, as will two hours of recorded “noise” from the cockpit. “So even when they find it there will still be a lot of piecing together of information,” Middleton says.

Malaysian Prime Minister Najib Razak was due to arrive in Perth late on Wednesday to inspect the search-and-rescue operations. He is expected to meet his Australian counterpart Tony Abbott on Thursday amid fresh controversy after it emerged that the final communication transcript from the cockpit was the standard “good night Malaysian 370” rather than the more casual “all right, good night” initially proffered by authorities. No explanation has been given for the discrepancy, the latest in a string to plague the investigation.

On Wednesday, Malaysian authorities held a closed-door briefing for relatives of people who were on the flight. “We had a very good meeting with them, and we answered all their questions,” Azharuddin Abdul Rahman, director general of Malaysia’s Department of Civil Aviation, told reporters.

Relatives of the 153 Chinese nationals on board MH 370 have been vigorous in their continued criticism of Malaysia’s handling of the disaster. 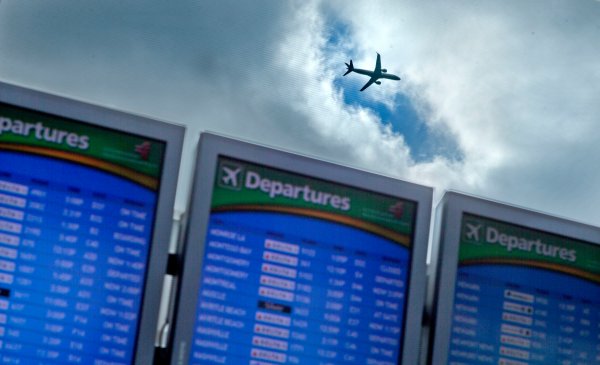 Atlanta Has the World's Busiest Airport, but Beijing Is Catching Up
Next Up: Editor's Pick