Before the eyes of the world were on her at her own wedding with Prince William, Princess Kate and younger sister Pippa Middleton turned heads as adorable bridesmaids.

In footage from their uncle Gary Goldsmith and Miranda Foote’s 1991 marriage ceremony obtained by the Daily Mail, the sisters donned light pink bridesmaids dresses with puffy sleeves and floral crowns. Their younger brother James, wearing a little tuxedo, was all smiles as he took photos with the men of the wedding party.

Although 9-year-old Kate looked thrilled to be dolled up for the day, waving at the camera and happily posing for pictures, Pippa, then age 7, fussed with her flower headpiece and seemed a little more grouchy.

Video from the reception shows Pippa and Kate getting kisses and gifts from their uncle to thank them for being part of the nuptials.

Pippa, 33, was a much more willing bridesmaid when Kate wed William in April 2011 in front of 1,900 gathered guests — and millions more watching around the world — at Westminster Abbey.

While Kate’s Alexander McQueen gown and Cartier Halo tiara made it clear it was her big day, Pippa’s form-fitting white bridesmaid gown made headlines of its own.

“As I have found out, recognition has its upside, its downside and – you may say – its backside,” Pippa quipped at an event in 2014, adding that the infamous couture “fitted a little too well.”

Kate, 35, will have an opportunity to return the favor for her sister soon. The younger Middleton sister became engaged to financier James Matthews this past summer and is expected to get married in May.

View the video on People.com. 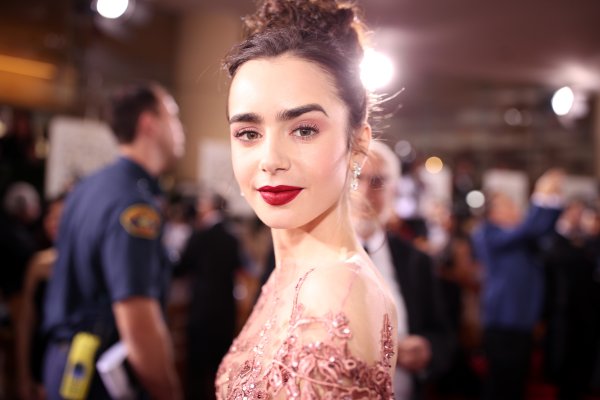 Lily Collins Reveals She Had an Eating Disorder as a Teenager
Next Up: Editor's Pick