Lily Collins Reveals She Had an Eating Disorder as a Teenager

Lily Collins shared a very intimate connection with her character in To the Bone — like Ellen in the movie, the actress suffered from an eating disorder as a teenager.

While speaking to IMDb Studio about the dark comedy during the 2017 Sundance Film Festival, the 27-year-old discussed her illness for the first time.

“This was definitely a more dramatic role for me, I suffered with eating disorders when I was a teenager as well,” she said. “I wrote a book last year and I wrote my chapter on my experiences a week before I got Marti’s script and it was like the universe putting these things in my sphere to help me face, kind of dead on, a fear that I used to have. And, a way to explain it as someone who’s gone through it and to open up a topic that is considered quite taboo with young people nowadays, male, female, and to really start a conversation.”

Collins lost weight to play the young woman battling anorexia, this time with the help of a nutritionist. But the physical transformation was only half the battle.

“It caused me to have to emotionally go there, but in a way that was the most safe, healthy way possible with a nutritionist, and really to physically go there but also emotionally and it did require a different set of emotional skills, to kind of go back in time for me, with you know, my experiences,” the actress explained. “So definitely a different type of film for me to do, very, very personal.”

Collins celebrated coming out about her longtime secret and thanked her fans for their support on Instagram with a joyful image of herself jumping surrounded by piles of snow.

“Chilled to the bone but feeling so free,” she captioned the snap. “What a huge moment this is for me. Owning my past, being open, and having no shame or regrets about my experiences. Sharing my history with eating disorders and how personal this film has been is one of the most fulfilling experiences of my life.”

She concluded, “Remember, you are never ever alone.” 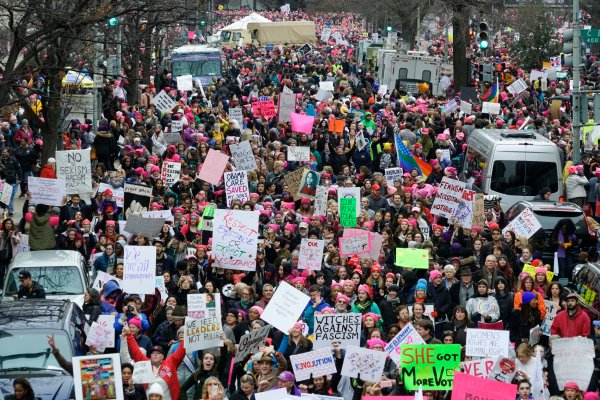 This Is What the Women's March in Washington Was Really Like
Next Up: Editor's Pick