It’s astonishing how different the perception of Prime Minister Theresa May’s announcements about Britain’s Brexit are in the United Kingdom compared to the rest of the world, especially in the European Union.

While parts of the British press and public are excited about her vision of a ‘global Britain,’ we here on the continent are shocked about May’s government’s lack of a plan regarding the future of the relationship between the U.K. and the rest of Europe.

With positive words about being a sovereign leading nation, May has promised her electorate total daydreams. She has described free trade of goods and services with old and new allies, while full well knowing that bilateral trade agreements are almost impossible to achieve in these times — no matter what President Donald Trump promises her in Washington this week. Her E.U. partners will have no reasons to give the U.K. the pick of the benefits it enjoyed in the single market, which represents around 50% of the county’s trade volume today.

May has said she wants to strongly co-operate with E.U. partners on security and foreign policy in order to better protect its citizens. But as former interior minister she should know best that leaving the E.U. will make it far harder for members to exchange information in the area of security and law enforcement, as mutual recognition in this area is only possible within the E.U. and on the basis of the European Courts jurisprudence.

The Prime Minister has also threatened the E.U. by announcing that the U.K. might opt to become a tax haven in order to hold and attract businesses, despite knowing that there’s already a strict legal framework laid out by the World Trade Organization (WTO) that hinders any state from doing this in such a way that it would become relevant for the E.U.

In addition, the Group of Twenty (G-20) is committed to intensifying its fight against tax dumping and the Eurozone countries already made clear that financial trade in Euro would be impossible outside the E.U.. To say the least, May’s attempt to convince global economic leaders of her ideas in Davos was not successful.

The only leader who embraces May in her desperation is Donald Trump, a politician who made clear that every U.S. policy decision from now on will put America first and whose first acts as president included carelessly cancelling a long-negotiated trade partnership with six other former Commonwealth member states.

For many businesses in Britain, it would be impossible to stay in the U.K., even if the government decided to subsidise its own economy on the cost of tax payers’ money and social security system, as they’re already dependent on full access to the E.U. single market, including the free movement of workers. Even British researchers fear that Brexit will lead to the loss of important projects, and high profile personnel are expected to leave.

May’s Brexit speech on January and visit to Donald Trump symbolize her surrender to the backward-turned nationalist wing of her Tory party. She has to realize that the rest of the E.U. will never give up its core ideas and values in order to appease relations with defecting partners or to avoid short term losses.

Her proposals are a slap in the face of the 48% of Brits who voted Remain, as well as those Leave voters who hoped for a soft Brexit. All those who believed that leaving the E.U. would put them in a better position than staying in the E.U. should by now have realized that this will not be the case.

In this light, it is hard to imagine how May will convince the people of Scotland and Northern Ireland to get behind her plans. Instead of making her country more sovereign and global, May is making it smaller, and dependent on Trump’s decisions. This may be the beginning of the end of the United Kingdom as we know it.

We are surprised and disappointed that May has decided to go ahead and build this dream world at the cost of the U.K. and the rest Europe, in order to survive a mess created by populists. 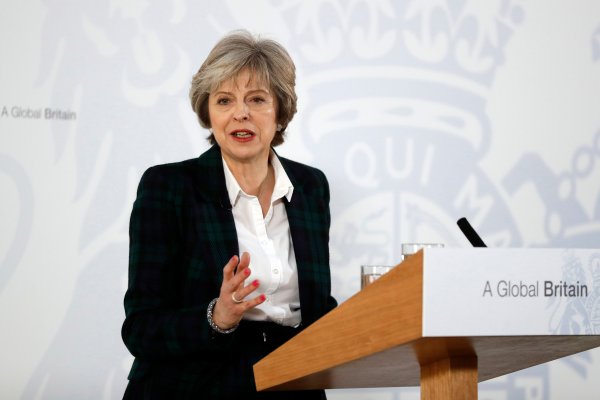 Theresa May Told Us What She Wants from Brexit. But What Is She Willing to Give?
Next Up: Editor's Pick