Well, this is good. You’re reading a story about another New England Patriots victory in the AFC championship game, and unlike two years ago, Tom Brady hasn’t been accused of puncturing any footballs. Looks like no ridiculous sports scandal will consume the nation’s attention in the lead-up to the Super Bowl, which is a relief. Washington’s already giving America a steaming plate of silliness. No one’s itching for Deflategate II. We’re in the clear, correct?

Having dominated the Pittsburgh Steelers, by a score of 36-17, in a wet and uninspiring AFC championship game, Brady and the Pats will make their seventh Super Bowl appearance of the Brady-Bill Belichick era. On Feb. 5 in Houston, New England will face the Atlanta Falcons, who blew out the Green Bay Packers 44-21 earlier on Sunday.

Seems like last week’s thrilling Packers-Cowboys/Steelers-Chiefs doubleheader sucked all the drama out of this year’s postseason: each of the remaining eight playoff games were decided by at least two touchdowns. Stories about ratings declines and a boring playoff have shrouded this NFL season; at least Super Bowl LI has the potential to spice things up. In a (hopefully) scandal-free affair, the ageless Brady goes for a fifth Super Bowl win, which will be a record for a starting quarterback, while simultaneously avenging this season’s 4-game suspension for the entirely overblown Deflategate controversy. New England shouldn’t roll over Atlanta Falcons, who are coached by Dan Quinn, the former coordinator for those historically excellent Seattle Seahawks defenses a few years back. Fingers crossed for a close game.

At this point, Brady, 39, will seemingly try any goofy endeavor to maintain prime form. Whether it’s subsisting on quinoa and millet, wearing (supposedly) sleep-inducing jammy pants, and during the AFC title game, donning a ridiculously oversized jacket, apparently stuffed with granite, to protect him from the ravages of the Foxborough winter. Whatever he’s doing, it’s working. Against Pittsburgh in the AFC championship, Brady was nearly flawless, throwing for 342 yards on 32-44 passing, with three touchdown tosses and no interceptions. He’s relieving yet another wide receiver from anonymity: world, meet Chris Hogan, a former Penn State lacrosse player who spent a single year playing college football not for the Nittany Lions, but for Monmouth as a grad student. The former part-time receiver at the tiny Jersey shore school, whom no NFL team drafted, is now catching flea-flickers from Tom Brady for 34-yard touchdowns, on his way to a nine-catch, 180 yard, two-touchdown outing in the AFC championship game.

What about the Falcons? Well, they’re not the Packers or Cowboys, one of the two true national franchises from the NFC who once had a shot to meet the Pats in Houston. A Pats-Pack or Pats-Boys matchup would have raised the profile of this Super Bowl. But Atlanta’s no mere consolation. The Falcons had been creeping up for years after drafting Boston College QB Matt Ryan in 2008. But they always stumbled in the playoffs, before finishing no higher than .500 the past three years. Atlanta revived itself under Ryan and Quinn this season. Falcons GM Thomas Dimitroff, former head of college scouting for New England, honed in on Ryan as a franchise quarterback because he reminded him of Brady: Matty Ice, as Ryan’s known, was smooth under pressure. After finishing 2016 with nearly 5,000 passing yards, he’s the likely NFL MVP.

The backfield’s deep — running backs Devonta Freeman and Tevin Coleman combined to gain 2,482 yards from scrimmage during the regular season, the most of any duo in the NFL. The defense is young, fast and physical. Atlanta shut out Aaron Rodgers and the Packers in the first half of the NFC championship game.

Atlanta’s never won a Super Bowl. The franchise is making just its second big game appearance, and its first since 1999. Given this disparity with the dynastic Pats, the Falcons may feel like an underdog tale, though New England’s just a three-point favorite at the outset. But if there’s any year to betray your instinct to pull for an upset, or root hard against Belichick’s evil empire, it’s probably this the one. Picture Roger Goodell, a man who fought Brady in court and painted him a cheater, handing the Super Bowl MVP trophy over to the Pats superstar. Awkward, delicious, and a perfect script. 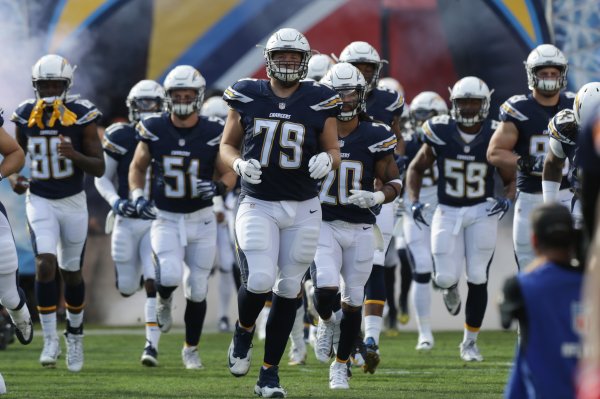 The Chargers Moving to Los Angeles Is an NFL Farce
Next Up: Editor's Pick