President Donald Trump held a call Sunday with Israeli Prime Minister Benjamin Netanyahu, as his Administration signaled that his promise to move the U.S. embassy from Tel Aviv to Jerusalem won’t be fulfilled imminently.

The call comes after Trump’s promise to strengthen ties between the U.S. and Israel after an icy relationship between Netanyahu and his predecessor. It also followed an Israeli government approval of hundreds of new settlements in East Jerusalem, which Palestinians claim as the capital of their potential state. Similar construction was a flash point between Netanyahu and former President Barack Obama, who warned it lessened the potential for a future peace accord between Israelis and Palestinians. At the suggestion of senior Israeli officials last month, Trump fiercely condemned the Obama Administration’s decision against vetoing a U.N. Security Council resolution critical of Israeli settlement activity.

The Israeli Prime Minister’s office described the call as “warm,” adding that the leaders “discussed the nuclear deal with Iran, the peace process with the Palestinians and other issues.” The statement added that Trump invited Netanyahu to meet him in Washington in February.

Before the call, White House press secretary Sean Spicer released a statement responding to reports that the U.S. embassy move was imminent. “We are at the very beginning stages of even discussing this subject,” he said.

Trump faces a June 1 deadline on deciding whether to move the embassy or to continue to waive the Jerusalem Embassy Act, as his three predecessors have done, which requires the movement of the embassy unless the President objects on national-security grounds. Even the suggestion of an impending move has drawn repeated criticism from Palestinian officials.

Trump’s nominee to be the U.S. ambassador to Israel, David Friedman, has been an outspoken advocate of both settlement construction and moving the U.S. embassy. Friedman owns an apartment in Jerusalem, and Israeli news reports suggest he is considering living there, rather than the ambassador’s official residence outside Tel Aviv, even if the embassy is not moved.

Trump told reporters after he attended a swearing-in event for his top aides in the East Room that the call with Netanyahu was “very nice.” He did not respond to a question about moving the embassy.

The Sunday afternoon call was made from the Situation Room, the White House said. 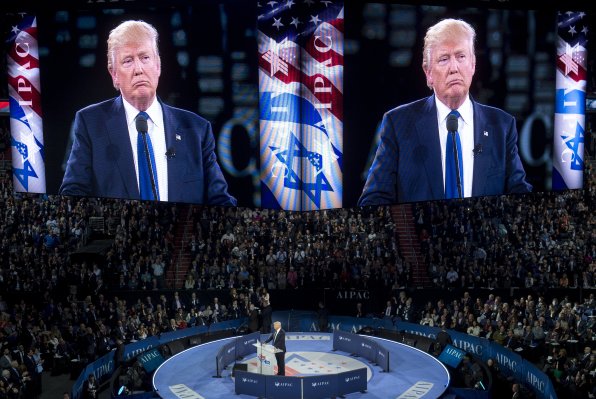 In the Trump Era, Israelis and Palestinians Must Find Their Own Path to Peace
Next Up: Editor's Pick