Donald Trump, God and the Depth of Faith

Given Donald Trump’s previous speeches and background, one might have expected that God would be absent from his Inaugural weekend; instead, it was the opposite and he put on quite a religious show in his speech and in prayer services Friday and Saturday. He took the oath of office on the Lincoln Bible (also used by President Obama at both of his Inaugurations) and the Bible he received as a child when he completed Sunday Church Primary School. Six religious leaders, including four Protestant preachers, a Cardinal, and a rabbi attended to offer prayers — more than any other President before him. Finally, country music artist Lee Greenwood performed the popular, patriotic song “God Bless the USA.”

Yet, to many observers, that’s all it was: a show in which Trump seemed to be overcompensating because he has shown little depth of faith before.

Trump’s Inaugural Address does not stand out among others as one that was especially religious, though it was sandwiched between three religious leaders before and after. His address demonstrated not so much a belief in God as in America and the people. The top two words mentioned were America (18 times) or American (11 times) and people (10 times). He followed a tradition of regarding the U.S. as guided by divine providence when he spoke of “righteous people and a righteous public” and that America “will be protected by God.”

Addressing division and intolerance in the country that his own statements fostered prior to the Inauguration, Trump said “there is no room for prejudice” and quoted Psalm 133 when he said, “The Bible tells us how good and pleasant it is when God’s people live together in unity.” He sounded another note of inclusion when he said “whether we are black or brown or white, we all bleed the same red blood of patriots” and, later, when he said we “are infused with the breath of life by the same Almighty Creator.” Yet, unlike his two immediate predecessors, there was no mention of basic American principles of religious freedom, liberty or democracy, and no reference to America’s history of immigration and religious diversity. Instead, there was talk of defending America’s borders and a very stern warning to “radical Islamic terrorism, which we will eradicate completely from the face of the earth.” It is worth noting that, earlier in the morning, Trump and his family attended a private Inaugural prayer ceremony led by the Rev. Robert Jeffress, a Dallas pastor who calls Islam evil.

The earliest American Presidents were very careful when employing religious language in Inaugural Addresses, but explicitly religious language increased in presidential Inaugural Addresses beginning in the second half of the 20th century. It has become almost obligatory since Reagan (1981) to end every Inaugural Address (and State of the Union address now too) with some combination of “God bless you” and “God bless America” — a move from asking for, appealing to, or seeking divine guidance to asking God to bless the people and country. George W. Bush, who was not shy about his born-again evangelical faith, sought to heal the nation’s wounds in his 2001 address after another very divisive election. Barack Obama continued the trend in 2009 and, in his 2013 address, acted as a kind of pastor to the people when he spoke of “our creed.” Trump has not, until now, really done that.

Trump ended his Inaugural Address by saying, “God bless you and God bless America,” but this was a departure from a pattern he displayed during the campaign. He did say “God bless you and good night” at the end of his acceptance speech at the Republican National Convention on July 22. He did not, however, thank God when he won the New Hampshire primary in February or the election in November. In New Hampshire, he was overcome with emotion and said, “Oh, wow! Wow, wow, wow! So beautiful. So beautiful.” Trump ended simply with “I love you all. Thank you very much. Thank you.”

When Trump won the election in the middle of the night on Nov. 9, his acceptance speech also didn’t mention God. Instead he ended by saying, “I love this country. Thank you. Thank you very much. Thank you to Mike Pence.” He thanked Mike Pence but not God.

Despite his use of Lincoln’s Bible, Trump’s recent attack of civil rights icon Congressman John Lewis before Martin Luther King Day and many controversial comments during the campaign do not offer much hope that he will change and listen to the “better angels of our nature” that Lincoln spoke of. It is also unlikely he will find inspiration from his spiritual adviser Paula White, who is associated with a brand of Pentecostal Christianity called Word of Faith that has been criticized as heresy for putting self instead of Jesus and the “prosperity gospel” over the Bible.

On Saturday, President Trump, Vice President Pence and their families attended the National Prayer Service at Washington National Cathedral, but the Trump Administration made it clear that there were to be only prayers, no sermon as is the custom. The lineup was also especially heavy with evangelical ministers but, in contrast to the private ceremony Friday morning, there were representatives from the Catholic, Greek Orthodox, Mormon, Jewish, Muslim, Sikh, Buddhist and Bahá’í traditions.

If he truly wants to be “President for all Americans” as he said when he won the election, Trump needs to use the transformative symbolic power of his Inauguration and do more than pay lip service to ideals he has not espoused before. He should try, over and over, to make good on his stated but as-of-yet unconvincing pledge to bring the country together by continually sounding a new note of inclusion, tolerance and higher moral purpose and affirming belief in the importance of a pluralistic society.

Hanson is a lecturer in history and the director of the Social Justice Research Academy at the University of Pennsylvania and the author of City of Gods: Religious Freedom, Immigration, and Pluralism in Flushing, Queens 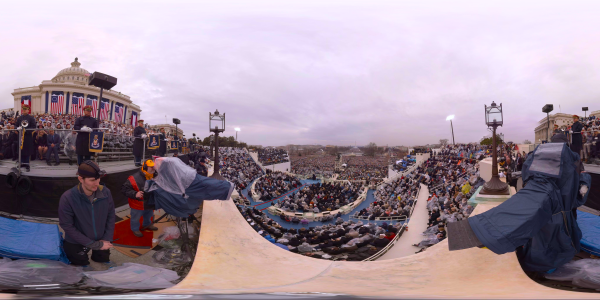 Experience President Trump's Inaugural Address in 360°
Next Up: Editor's Pick