“Today, many of you are scared and marching in the streets. You are worried that the country is in the hands of this unpredictable man,” the shirtless Russian president, played by Beck Bennett, said. “It’s not. Relax, I got this.”

Putin also took a critical eye to the 36 hours of Trump’s presidency, saying that though the new president is “perhaps not” perfect, he could “get him there.”

“I’m glad to see so many people showed up to your inauguration,” Putin said, addressing Trump and showing a picture of a packed National Mall in Washington D.C. “Oh wait, that’s the Women’s March.”

Millions of people turned out in D.C. and cities across the U.S. and the world in opposition to the Trump Administration’s views on Saturday. The massive attendance overshadowed the relatively small presence at Trump’s inaugural ceremony.

Although Alec Baldwin did not appear to play Trump following the presidential inauguration, SNL took on the new administration’s inaccurate statements about the size of the crowd at the inauguration on Friday with some friendly advice for Trump.

“Today you went to the CIA and said 1 million people came to see you in Washington, D.C.,” Putin said. “If you’re going to lie, don’t make it so obvious. Say you are friends with LeBron James—not that you are LeBron James.” 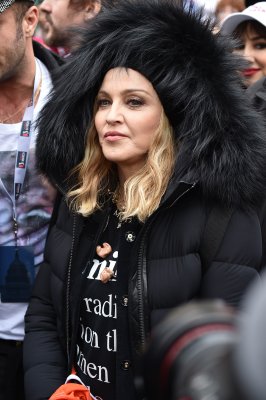 Madonna Has a Strong Message for Critics of the Women’s March
Next Up: Editor's Pick