Melania Trump's Reluctance Matches A FLOTUS Before Her

Melania Trump arrives on the West Front of the U.S. Capitol in Washington on Jan. 20, 2017.
Win McNamee—Reuters
Ideas
By Erica Armstrong Dunbar
Dunbar is the Blue and Gold Professor of Black American Studies and History at the University of Delaware

With reports about Melania Trump’s decision not to relocate to Washington D.C. this month, much has been said and written about its financial toll on New York. But what about her decision’s impact on the nation?

We have yet to hear details about how the commuting Melania Trump will be available for state dinners and the constant social/political events that are often attended or hosted by the president’s spouse. Traditionally, Mrs. Trump would be expected to manage a staff, serve as the White House hostess and to represent a cause (usually related to women and children).

Mrs. Trump’s reluctance to relocate and to step into the spotlight with the president is far from unique and many first ladies have shared in her hesitancy. Presidents’ wives have confronted the personal dilemmas associated with the Office of the President since the founding of the new nation. Martha Washington was a case in point.

On April 30, 1789, George Washington took the oath of office from the balcony of New York’s federal hall. The president’s swearing in was followed by an address to the Senate chamber, a speech that was marked by his visible anxiety and barely audible voice. There were many reasons for Washington’s flustered appearance as the tasks that lay ahead were great. Nevertheless, the new president steadied himself, was sworn in, completed his inaugural address, and participated in a large celebration.

But his wife was not by his side.

Martha Washington was deeply unhappy about her husband’s new post and their impending move to New York. In her mind, she had sacrificed quite a bit for the nation, enduring long separations from her husband as he commanded the Continental Army. Their time together at Mount Vernon following the Revolution must have seemed fleeting at the moment that her husband accepted the presidency, an acceptance about which she had grave concerns. The president’s wife believed that, “it was much too late for him to go into public life again,” however the president’s age and health were not Martha Washington’s only concerns. She was deeply resentful about the impact the presidency would have upon her family, telling her nephew, “[o]ur family will be deranged as I must soon follow him.” There would be no refusal to move to New York, the site of the nation’s first capital, but Martha Washington was in no rush to get there. She took her time.

A month after George Washington’s arrival in New York, Robert Lewis, the president’s nephew, arrived at Mount Vernon to escort his aunt on her northern journey. The scene was chaotic as Martha Washington appeared agitated. She had been left in charge of packing and tying up loose ends for a relocation that she did not want. But within a month’s time, she followed her husband’s wishes. Martha Washington left Mount Vernon on May 16, 1789. She took six slaves along for the journey- a reminder of home. She would refer to her time in the North as “the lost days.”

The new responsibilities that confronted Mrs. Washington were altogether different from anything she had ever experienced. She was catapulted to the center of the public eye as her marriage to the first president of the United States carried important obligations. Given her husband’s social limitations (he was not the most charismatic or talkative man) Martha Washington would shoulder the social calls and hosting of gatherings and dinner parties, duties that would begin the day after her arrival in New York. Prominent politicians and foreign dignitaries would dine and socialize with the Washingtons and it was Mrs. Washington’s responsibility to make certain that they were comfortable and entertained. The spotlight was unyielding.

Although she was not referred to as the “first lady” (the term was not used until the nineteenth century) Martha Washington quickly became an American icon, whether she wanted to be or not. She felt a new scrutiny about her appearance, and a pressure to dress in finer clothing than what she wore in the comfort of her rural Virginia farm. Her enslaved seamstress Ona Judge was no longer the best option for creating Martha Washington’s attire. The numerous shops in New York (and later on, Philadelphia) would assist the president’s wife as she upgraded her clothing. She was conscious about the importance of her appearance, but looked for a balance that was appropriate yet slightly understated.

Martha Washington understood that her life would not be her own once she took up residence in the nation’s first capital, and she was right. She would balance her time between caring for her live-in grandchildren and by representing a new nation. Every first lady who followed in her footsteps would come to understand that normalcy would change, and many worked furiously to maintain an appropriate distance between their families and the public sphere. As Michelle Obama stated in her final interview with Oprah Winfrey, the next family that moves into the White House will find that, “their lives will be turned upside down.”

Like Martha Washington, Melania Trump is a reluctant First Lady. But unlike the first presidential spouse, Mrs. Trump appears uninterested in notions of national obligation. Perhaps some will see her refusal to fall in line with first ladies of the past as daring or perhaps even liberating. I wonder what every other first lady will think about her decision.

Erica Armstrong Dunbar is the Blue and Gold Professor of Black American Studies and History at the University of Delaware, and author of Never Caught: The Washingtons’ Relentless Pursuit of Their Runaway Slave, Ona Judge, out next month 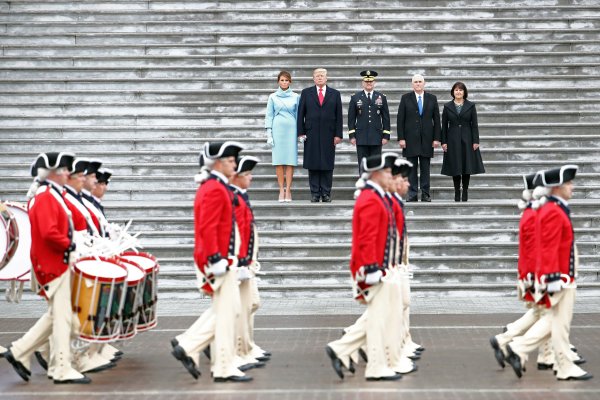 Day One In Donald Trump's America
Next Up: Editor's Pick