Why Donald Trump's Showmanship Couldn't Save the Inauguration

U.S. President Donald Trump waves to supporters as he walks the parade route with first lady Melania Trump after being sworn in at the 58th Presidential Inauguration January 20, 2017 in Washington, D.C.
Pool—Getty Images
By Philip Elliott

On the day Donald Trump tucked the nuclear launch codes into his arsenal and took up residence at the White House, he was unable to lock down the entire spotlight.

Trump’s crowds on Friday were dramatically smaller than either of Barack Obama’s inaugural celebrations—so small that Washington’s notoriously fickle subway system actually kept pace. Trump lacked star wattage in his musical guests. Rain began just as Trump began to speak. His parade was thin and behind schedule, and the growing anti-Trump protests in the city stole some of his thunder as they set trash on fire and disrupted a town not know for handling crowds well.

The 45th President of the United States, a former reality show star and current producer of The Apprentice brand, seems to have scripted a dud. He stood at the foot of the Capitol, surrounded by official Washington, and promised to end his new neighbors’ influence. He took a jab at fellow Republican Mitch McConnell for not green-lighting his Cabinet picks more quickly and questioned lawmakers’ motives. The internet decided that Trump plagiarized part of his speech from a Batman villain. Newly minted First Lady Melania Trump seemed at times to be counting down the hours until she could fly home to New York, where she will remain. Even Trump seemed to be restless with the ceremony of the job.

The man who began his unlikely White House campaign by descending a gold-hued escalator to the lobby of his Manhattan skyscraper arrived there under gray skies and with the roar of protesters not far away. He is, without doubt, the most unpopular man to arrive in power and perhaps the most unpredictable. Several points he made during his first speech as president sounded like they could have been lifted from protectionist union halls in the Rust Belt, not written by a Republican President. “Politicians prospered, but the jobs left, and the factories closed,” he said. “The Establishment protected itself, but not the citizens of our country.”

It’s easy to promise to make America great again. But it’s quite another to deliver, as Trump’s predecessors from both parties are painfully aware.

Trump’s speech, a crisp 16 minutes, was more a governing philosophy than action plan, in the words of his advisers. It was a dark promise that a Trump Administration would always put America first—although it’s tough to find a U.S. President who didn’t pledge to do just that. The world watched with uncertainty as Trump promised to do a U-turn on foreign policy; isolationism, it appears, is the new American stance.

To be fair, there’s really not much Trump could have done to avoid this. The spectacle of his campaign doesn’t easily translate to one of Washington’s most tested traditions. The outdoor event on the West Front of the Capitol in January tests even the most die-hard supporters’ resolve to spend hours shifting from one foot to the other to stay warm. It would be tough to match Aretha Franklin and Yo-Yo Ma, who provided the music at Obama’s 2009 festivities. No tweets can overcome the reality that Trump is becoming the 44th white man to take the role, replacing the nation’s first black President. And Trump has shown he doesn’t much like to do many of the things that Presidents spend their time doing.

Yet Trump knows how to create a spectacle. His inauguration may be the last time he allows someone else to stage-manage an event meant to treat him like a star. 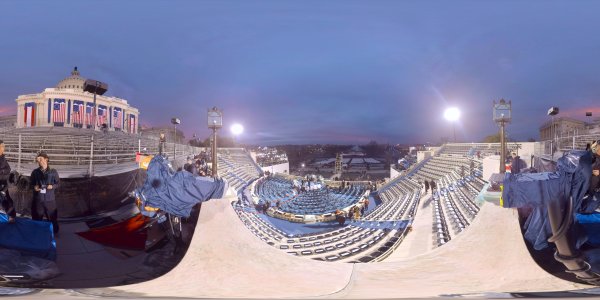 Watch the Capitol Get Ready in Under a Minute
Next Up: Editor's Pick