Some Trump Supporters at Inauguration Warm to Some Obama Ideas

Former President Barack Obama and his wife Michelle Obama stand with President Donald Trump and his wife Melania Trump on the East front of the Capitol Hill in Washington on Jan. 20, 2017.
Jack Gruber—AP
By Charlotte Alter

A number of supporters of President Trump at his inauguration embraced two big ideas his predecessor championed, even as they harshly criticized former President Obama.

In interviews on the National Mall, many Trump backers favored allowing undocumented immigrants who were brought to the U.S. as children to stay and creating a more accessible health care system.

That didn’t mean they liked how Obama handled either policy. Employee benefits consultant Debbie Schultz, for one, was not a fan of the Affordable Care Act, which she thought was not well-designed.

“It was a disaster,” she said. “If you’re gonna have a mandate, it has to be enforceable,” she said. Her son and employee Geoff Rowson, 30, agreed. “If we as a society say that health care is a right, then Obamacare is on the right path,” he said. “It just needs to be fixed.”

“Ensure that the replacement doesn’t leave anyone out,” said Ruth Rolden, 61, a registered nurse from South Carolina. She wants Obamacare to be repealed, but she wants to make sure Trump “fully commits to keeping the good parts.”

Many Trump supporters at the inauguration expressed support for a health care system that ensures coverage for all citizens and includes those with pre-existing conditions, even as they roundly criticized the Affordable Care Act. Trump has also said he would like to keep parts of the law, such as allowing young adults to stay on their parents’ plans till 26 and ensuring continued coverage for people with pre-existing conditions.

A new CNN/ORC poll shows that nearly half of Americans support the law, which brought the number of uninsured Americans to an all-time low in 2015 according to U.S. Census figures.

Supporters who showed up to Trump’s inauguration also said they had some sympathy for undocumented immigrants, especially law-abiding workers and children who had been brought to America by their parents. Support for immigration is at a 15-year high, with 41% of Americans saying they’re satisfied with the immigration levels, according to a recent Gallup poll.

“I know some illegal aliens who have been deported and I would like them to come back,” says Rian Vos, a small business owner from Iowa. “There are good people being deported.” He added that he also supports gay marriage and is pro-abortion-rights.

Rolden, who is herself an immigrant from Costa Rica (her parents emigrated when she was two,) says she opposes illegal immigration but hopes Trump can find a solution besides mass deportation. “We have a lot of brainpower in this country, and we can come up with a compassionate solution,” she said.

Mickey Gibson, a 69-year old Trump supporter from Florida, says she has no problem with some undocumented immigrants staying in the country “as long as they abide by our laws and are good citizens of the U.S.,” she said. She opposed Obama’s immigration policy, but didn’t seem to object to the idea of young people being allowed to stay if they were brought to the country as children.

“If they’re children, and they’re brought up correctly, they’ll be good citizens,” she said.

Still, other Trump supporters at the inauguration said they planned to hold Trump to his promises.

Correction: The original version of this story incorrectly identified Geoff Rowson, who works for Debbie Schultz. He is also Schultz’s son. 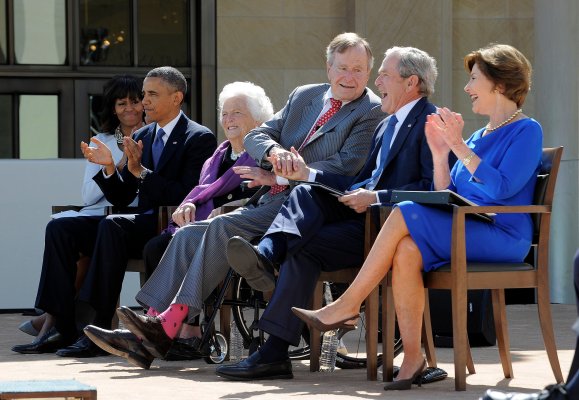 Jimmy Carter Will Go to Inauguration: Bush, Clinton Not Sure
Next Up: Editor's Pick