This Saturday my daughter and I will join with the hundreds of thousands of women and men marching in Washington D.C., and 300-plus cities around the world, in peaceful protest against the divisive rhetoric and policy proposals of the new American president.

Those policies threaten to turn back the clock on decades of progress on women’s rights. So we will come together from communities as diverse as the country we love, bringing our own unique values, hopes and dreams in order to march as one behind a single message: we won’t go back.

I am marching because President Trump has promised to undermine decades of legal precedent founded on Roe v. Wade – which, if overturned, would endanger the health and safety of millions of women and drive a devastating crack into the foundation of American rule of law. As a lawyer and the head of the Center for Reproductive Rights, a global reproductive rights organization that is co-sponsoring the Women’s March on Washington, I know all too well that the threats we face are real.

It mattered over a century ago, when thousands of women marched on Washington during the 1913 Presidential inauguration, and were spat on and pelted by onlookers for daring to demand the right to vote.

It mattered in 2004, when millions showed up to demand protection for their reproductive rights in the historic March for Women’s Lives. I marched that day with three generations of my family, including my mother, born in 1927, and my daughter, born in 1992.

It mattered last March, when more than 70 organizations brought together thousands of supporters in the one of the largest rallies in Supreme Court history on the morning of oral argument in Whole Woman’s Health v. Hellerstedt – in which attorneys for the Center for Reproductive Rights won the most important abortion rights case in a quarter of a century. And it mattered last year in Poland, when women shut down entire cities with demonstrations that thwarted an extreme abortion ban.

We will march on Saturday, like those women, to define how our troubled moment will be remembered, and to ensure that the first day of the Donald Trump presidency will be historic for all the right reasons. We march so that our daughters will look back with the same gratitude that we hold for the women who marched before us.

We march to remember the women who died in the days before the Supreme Court ruled in Roe v. Wade that access to safe, legal abortion is a constitutional right. We march so that this dark chapter in our history is not forgotten, in the hope that it will never be repeated. We march because it is now our daughters’ lives at risk.

We march because access to reproductive health care, including abortion, is not just a legal right – it’s a human right.

We march because we’ve fought these battles around the globe for decades, and we know what happens when governments deny women their right to health care and autonomy over their own bodies. We know that banning abortion does not end abortion, and that restricting abortion access has only one guaranteed outcome: forcing unnecessary suffering on women.

We march because we’ve seen that suffering firsthand in more than 330 cruel, dangerous and insulting restrictions on abortion access passed in the last six years alone.

We march because the American people have spoken loud and clear: Seven in 10 Americans want abortion to be safe and legal. We march to put the new administration on notice that if they ignore the will of the people and come after our reproductive rights, they will have a fight on their hands.

This march is only the beginning of how we will show up in the coming weeks and months and years. We’ll continue to make our support visible on social media, in our communities and to our elected officials. By being forthright and visible, we will remind one another that we are stronger when we work and speak as one.

But for now, we march because we are faced with uncertainty about the future and a troubling sense that something fundamental about our democracy is faltering. So we turn to the most democratic form of peaceful protest we know: We gather together to declare that these are our numbers, and this is what we believe, and if you attack what we hold most dear then you will have to answer to us all.

Nancy Northup is the president and CEO of the Center for Reproductive Rights. 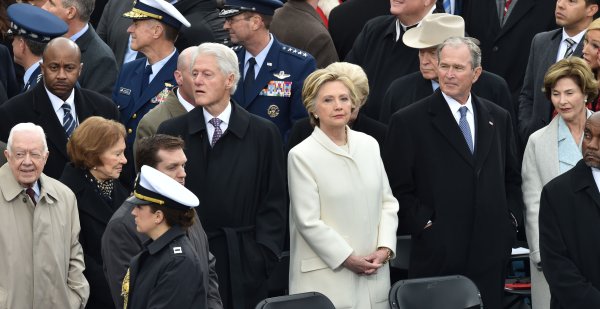 The Women's March Is Not Officially Honoring Hillary Clinton
Next Up: Editor's Pick