Decorators Are Already at Work in the White House

Moments after President Obama took his last lap around the Oval Office and left his letter for his successor on the Resolute Desk, the task of making the White House ready for its next occupant began in earnest.

In the White House Residence, nearly everyone but the kitchen staff were marshaled to help move the former First Family’s belongings out to waiting trucks, and to bring in the new one’s. The sounds of vacuums were audible throughout the West Wing, as staffers worked to prepare offices for their new occupants.

At noon, the White House’s official Twitter and Facebook accounts were turned over to Trump’s team. A new website for the administration was live seconds later. (The @POTUS account briefly used a photo from Obama’s inauguration, before being replaced with an American flag.)

A handful of top Obama aides lingered in the West Wing until about 11:15, when they departed for the ex-president’s departure ceremony at Joint Base Andrews. Just after noon, the first members of Trump’s transition team made their way over to the White House from the transition headquarters three blocks away. Senior officials were set to arrive later in a shuttle from Capitol Hill. 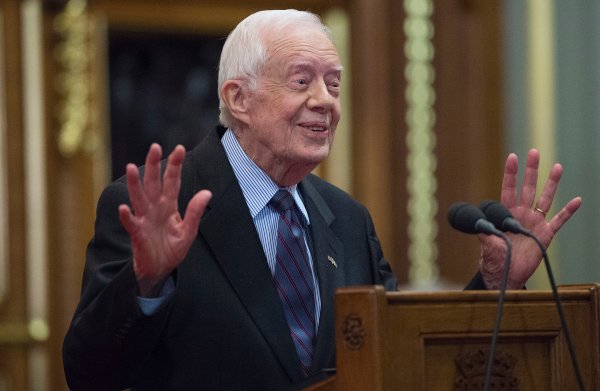 How Jimmy Carter Beat Cancer and Became the Oldest President to Attend an Inauguration
Next Up: Editor's Pick