'We Are All Exceptional.' Read Chuck Schumer's Inauguration Day Remarks

New York Democratic Sen. Chuck Schumer delivered remarks at the inauguration of President Donald Trump on Friday. Facing boos from the crowd, Schumer warned that America is facing “a rapidly changing economy that benefits too few, while leaving too many behind, a fractured media, a politics frequently consumed by rancor.”

“Whatever our race, religion, sexual orientation, gender identity, whether we are immigrant or native-born, whether we live with disabilities or do not, in wealth or in poverty, we are all exceptional in our commonly held, yet fierce devotion to our country, and in our willingness to sacrifice our time, energy, and even our lives to making it a more perfect union,” he said.

Read this full remarks below:

My fellow Americans, we live in a challenging and tumultuous time, a quickly evolving, ever more interconnected world, a rapidly changing economy that benefits too few, while leaving too many behind, a fractured media, a politics frequently consumed by rancor.

We face threats foreign and domestic. In such times, faith in our government, our institutions and even our country can erode. Despite these challenges, I stand here today confident in this great country for one reason: you, the American people.

We Americans have always been a forward-looking, problem-solving, optimistic, patriotic and decent people. Whatever our race, religion, sexual orientation, gender identity, whether we are immigrant or native-born, whether we live with disabilities or do not, in wealth or in poverty, we are all exceptional in our commonly held, yet fierce devotion to our country, and in our willingness to sacrifice our time, energy, and even our lives to making it a more perfect union.

Today, we celebrate one of democracy’s core attributes, the peaceful transfer of power. And every day, we stand up for core democratic principles enshrined in the Constitution — the rule of law, equal protection for all under law, the freedom of speech, press, religion — the things that make America America.

And we can gain strength from reading our history and listening to the voices of average Americans. They always save us in times of strife. One such American was Major Sullivan Ballou. On July 14th, 1861, when the north and south were lining up for their first battle, a time when our country was bitterly divided and faith in the future of our country was at a nadir, Major Ballou of the 2nd Rhode Island Volunteers penned a letter to his wife, Sarah.

It is one of the greatest letters in American history. It shows the strength and courage of the average American. Allow me to read some of his words, which echo through the ages. “My very dear Sarah,” he wrote. “The indications are very strong that we shall move in a few days, perhaps tomorrow. If it is necessary that I should fall on the battlefield for my country, I am ready. I have no misgivings about or lack of confidence in the cause in which I am engaged and my courage does not halt or falter.

I know how strongly American civilization now leans upon the triumph of the government and how great a debt we owe to those who went before us, through the blood and suffering of the revolution. And I am willing, perfectly willing, to lay down all my joys in this life to help maintain this government and to pay that debt. Sarah, my love for you is deathless. It seems to bind me to you with the mighty cables that nothing, but omnipotence can break. And yet, my love of country comes over me like a strong wind and bears me irresistibly on with all these chains to the battlefield.”

Sullivan Ballou gave his life on the battlefield a week later at the first battle of Bull Run. It is because Sullivan Ballou and countless others believed in something bigger than themselves and were willing to sacrifice for it that we stand today in the full blessings of liberty in the greatest country on Earth.

And that spirit lives on in each of us, Americans whose families have been here for generations and those who have just arrived. And I know our best days are yet to come. I urge all Americans to read Ballou’s full letter. His words give me solace, strength, I hope they will give you the same.

Now, please stand while the associate justice of the Supreme Court, Clarence Thomas administers the oath of office to the vice president of the United States. 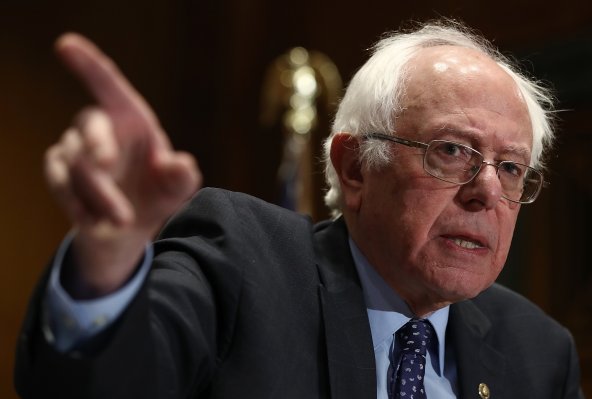 Bernie Sanders Has a Message on Donald Trump's Inauguration Day: 'We Are Not Giving Up'
Next Up: Editor's Pick