What Hillary Clinton Does Is No Longer Our Concern

As the inauguration draws closer, it appears Hillary Clinton has found a way to disappoint us one more time. The former presidential candidate who retreated to the woods and shied away from the spotlight after her electoral college loss is attending the swearing-in of our 45th president.

The news shocked and dismayed liberals around the country. Some reacted with anger, some with weary sighs. Many had hoped she would eschew this formality of former First Ladies. Others were hoping she would be spearheading their revolution.

If Clinton has proven one thing over the course of her decades-long stint in politics, it’s that Hillary Clinton is going to Hillary Clinton. She is only what she is, and she will be only what she can be. She plays by the rules, adapts to public will and tries to affect change from the inside in small, incremental steps well within our structural bounds. She raises no sword. She never has. And at nearly 70, after having her life’s dream smashed to pieces, she’s certainly not going to start now.

When President Barack Obama gave his final address to the nation, he said, “It falls to each of us to be those anxious, jealous guardians of our democracy; to embrace the joyous task we’ve been given to continually try to improve this great nation of ours. Because for all our outward differences, we, in fact, all share the same proud title, the most important office in a democracy: Citizen.”

It has always been our job to do this work, and we’ve become complacent. Even while fighting for our rights, we’ve started taking our democracy for granted. We’ve all grown up believing that our country’s basis could not be shaken, but we have been misled. The foundation upon which our country has been built is shaking now, and we, the people, are casting out for leaders, looking for change. But we need to look in the mirror. And what’s more, we need to look at the faces of our fellow citizens—our people of color, our Muslims, our LGBTQ community—and we need to acknowledge that no upper politicians failed them. We failed them. We failed ourselves.

Clinton has been a strange, ill-fitting progressive hero since the beginning. She’s never lied about being the full-fledged politician she is. She’s taken on all the guilt and shame of a nation, being attacked for her career, for her decision, for her gender. She continues to face backlash against every decision she makes. Had she chosen not to attend the inauguration, people would have been upset about that, too. Hillary Clinton can do nothing without incurring the wrath of the country.

But wouldn’t it be nice if someone in a position of notoriety and power in the Democratic Party stepped up and said no? No to the corruption, to the cheating, to the lying going on all over our government, enveloping all of our citizens until we no longer know up from down? No to the scandalous changes in transparency. No to the chipping away at our first amendment rights? Don’t we deserve that leader? Wouldn’t Clinton be the obvious choice?

Clinton defenders continue to say, “We take the high road,” but what they are doing at this point no longer is excusing Clinton’s behavior, since she is no longer really an influence in the political sphere. Instead, we’re excusing our own complacency as allies to our cause. Taking the high road has led us off too many cliffs, lately, and we need a new strategy.

And now we have to do it ourselves. There is no leader but us. We failed the woman we chose as our hero, and to keep assigning her blame detracts from the work we must be doing.

At the same time, mourning that hero, understandable, along with the anger that comes with it. Clinton continues, even after the election, to do her job. She is acting as political sponge, giving progressive angst a place to settle.

But this anger we feel shouldn’t be diffused. We need to aim it at ourselves. Then we need to use it to find true progressive heroes. Because Hillary Clinton will be placing her hand over her heart and singing the national anthem while watching a populist phenomenon take over the country.

But this anger we feel shouldn’t be diffused. We need to aim it at ourselves. Then we need to use it to find true progressive heroes. Because Hillary Clinton will be placing her hand over her heart and singing the national anthem while watching a populist phenomenon take over the country.

Don’t normalize Donald Trump. Don’t stop resisting. But time is well past for Hillary Clinton to be shouldering the weight of unrealistic expectations and impossible standards so that the people can continue to do nothing.

Obama ended his speech giving agency to the very people looking to Clinton and looking to him to lead the charge against the ludicrous, cartoonish scourge with which we are now faced.

“I’m asking you to believe. Not in my ability to bring about change—but in yours.” 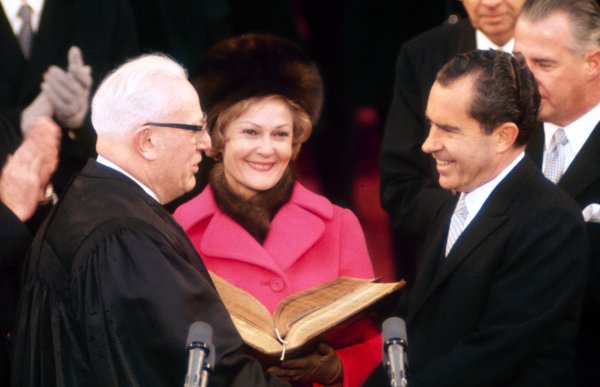 See Photos From Every Presidential Inauguration LIFE Magazine Ever Covered
Next Up: Editor's Pick