On Friday morning, the trio unveiled their latest public art work: a four-year-long open livestream titled #HEWILLNOTDIVIDEUS, kicked off with the help of Jaden Smith. According to the livestream’s site, “The public is invited to deliver the words ‘HE WILL NOT DIVIDE US’ into a camera mounted on a wall outside the Museum of the Moving Image, New York, repeating the phrase as many times, and for as long as they wish.” It notes that it will run for four years, or “the duration of the presidency” and is open 24/7.

Smith—son of Will, actor, rapper, and teen icon—stationed himself in front of the camera and uttered the phrase continuously. LaBeouf himself, wearing a beanie, hovered at the edge of the scene as Vulture noted.

“The mantra ‘HE WILL NOT DIVIDE US’ acts as a show of resistance or insistence, opposition or optimism, guided by the spirit of each individual participant and the community,” the livestream site explains about the project. You can watch it here. It’s also listed on the museum’s site.

This, of course, is not American Honey actor LaBeouf’s first foray into livestream art. Just last month, his team camped out in the Sydney Opera House for #ANDINTHEEND, following a series of similar interactive installations. 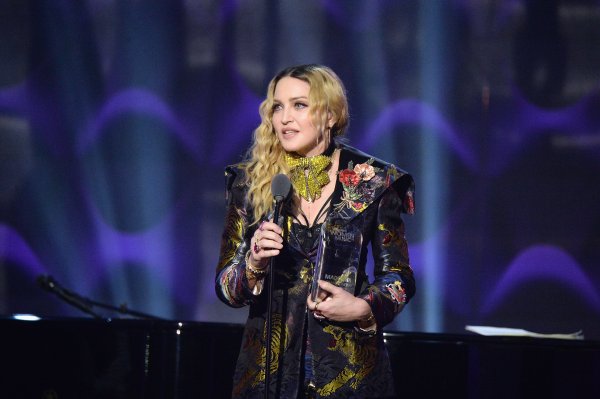 Madonna on Donald Trump's Inauguration: 'We Can Only Go Up From Here'
Next Up: Editor's Pick