Men dig a grave to bury a boy who died following a reported government airstrike in the rebel-held town of Douma, on the outskirts of the capital Damascus, on Nov. 14, 2016. Douma, the largest town in the Eastern Ghouta area with more than 100,000 residents, is surrounded and regularly shelled by regime forces.
Abd Doumany—AFP/Getty Images
By Jared Malsin

In the winter and spring of 2014, forces loyal to Syrian President Bashar Assad imposed what became a total siege on rebel-held towns on the outskirts of Damascus. Parents substituted plastic bags for diapers. The hospitals ran short of essential medicines. Fuel to run the generators ran short, leaving people without electricity for all but a few hours a day. “Simply, it’s living in the Middle Ages. No electricity,” says Dr. Mohamad Katoub, a physician from the town of Douma in the area known as Eastern Ghouta, recalling the height of the siege.

Residents of this opposition-controlled enclave, on the outskirts of the Syrian capital, fear Eastern Ghouta could soon face a return to these kinds of siege conditions, if the fresh round of peace talks due to start in Astana, Kazakhstan this week fail to bring an end to fighting. Hundreds of thousands of lives lie in the balance, in a war that has already claimed half a million.

With the rebel bastion of eastern Aleppo now in the hands of the regime, Assad and his forces are ready to turn their attention to a series of rebel pockets around Damascus. Eastern Ghouta and other remaining holdouts of armed opposition near the capital are emerging as the next central battleground of the civil war. Home to well-armed rebel groups and situated on the doorstep of the capital, Eastern Ghouta is one of the last major obstacles to Assad’s consolidation of power in Syria’s major cities.

With a population as high as 450,000 people, Eastern Ghouta is larger than the rebel enclave in the eastern half of Aleppo, which fell to government forces and allied militias in December. Already encircled by pro-Assad forces, Eastern Ghouta is sustained by an elaborate network of smuggling tunnels that connect the area to the regime-held areas. The tunnels ease the effects of the blockade, providing vital goods to the people inside the enclave, and enriching smugglers, rebels, and government officials thought to be involved in smuggling.

Assad’s regime is expected to seek a negotiated settlement with rebel groups inside Eastern Ghouta in hopes of convincing them to surrender, rather than launching another massive military campaign along the lines of the onslaught on eastern Aleppo last year.

The suburb has already endured years of intense bombardment by Assad’s forces. It was also the site of the pivotal 2013 chemical weapon attack that killed more than a thousand people and prompted the Obama administration to threaten military action against the Assad regime. Still, experts believe Assad would prefer that the rebels in the region surrender through negotiations.

“I think that’s their preference always. The less people they have to sacrifice to get a place, the better, in terms of their own soldiers, but also in terms of destruction in these communities. They want them functioning. They don’t want deserts,” says Aron Lund, an analyst and the author of an exhaustive report on the situation in Ghouta for The Century Foundation, a New York-based think tank. “They’ve already started these negotiations,” he tells TIME.

Eastern Ghouta residents and humanitarian officials are concerned that the government could seal the tunnels in an attempt to gain even more leverage over the rebels. Mohamad Katoub, the doctor from Douma, says that Eastern Ghouta’s past experience with siege-like conditions could influence the outcome of the negotiations.

“They might be able to face the siege more than other areas, because they used to use alternatives. The other thing is, they might be aware that facing the siege, in those conditions, might cost a lot. So they might be more flexible in the negotiations,” says Katoub, who is now a Turkey-based spokesman for the Syrian American Medical Society, a relief organization.

A deal is not impossible. Analysts say Assad and his government would prefer to negotiate a localized deal with Eastern Ghouta rebels because it would further divide and weaken the opposition in any future negotiations toward a broader, national peace deal. The leader of Eastern Ghouta’s most powerful armed group, Mohamed Alloush, is one of the top rebel leaders expected to attend the Astana peace talks. Alloush is the leader of Jaish al-Islam (the army of Islam) a hardline insurgent organization that is regarded as one of the most important in the entire Syrian rebellion. The group is known to have drawn fighters from the local population of the Damascus suburbs, rather than relying on militants from elsewhere in the country or foreign jihadists.

Past sieges imposed on other rebel-held towns and cities provide a template that the regime could deploy in Eastern Ghouta. First, Assad’s forces impose devastating blockades. Fighting follows, sometimes for years, until negotiators agree an end to the siege, in return for the safe exit of rebel fighters and residents. The most significant blueprint for such a deal was in Aleppo, which fell to the government in December. A similar scenario unfolded in Daraya, outside Damascus, which was forced to surrender last August after four years of siege and shelling, and a section of the city of Homs, which was evacuated in December 2015.

Lina Khatib, head of the Middle East and North Africa Programme at Chatham House in London, says that Eastern Ghouta is a strategic target for the Assad regime.

“The attack on eastern Ghouta is a way for the government to widen the scope of its so-called local reconciliation agreements, between the regime and allies and different rebel groups,” she tells TIME. “These so-called reconciliation agreements are really surrender agreements. So I would read what’s happening in Eastern Ghouta as an attempt by the government to force Jaish al-Islam to surrender.”

So as the key parties assemble in the Kazakh capital to reach consensus on how to bring the five-year conflict to an end, what happens to this Damascus suburb could either be a turning point in the war — or the scene of Assad’s next major offensive. 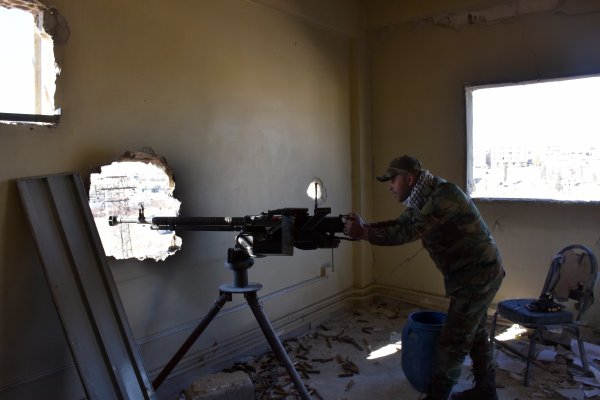 Clashes Violate Syria Ceasefire Soon After It Starts
Next Up: Editor's Pick