Former President George W. Bush (2-R), his wife Laura (R) stand with President Barack Obama (2-L) and First Lady Michelle Obama (L) as Bush departs from the U.S. Capitol after the inauguration of Barack Obama as the 44th president of the U.S. on Jan. 20, 2009 in Washington, DC.
Pool—Getty Images
By Melissa Chan

Former Presidents Bill Clinton and George W. Bush warned their successors of future challenges they may face but also spoke of the thrill of taking the nation’s highest office in letters that were publicly revealed Thursday.

Clinton wished Bush “success and much happiness” while Bush told President Barack Obama he was “pulling” for him, according to the letters obtained by ABC News from the National Archives and Records Administration.

“There will be trying moments. The critics will rage. Your ‘friends’ will disappoint you. But, you will have an Almighty God to comfort you, a family who loves you, and a country that is pulling for you, including me,” Bush wrote to Obama in January 2009. “No matter what comes, you will be inspired by the character and compassion of the people you now lead.”

Clinton’s letter had a similar sentiment.

“You lead a proud, decent, good people. And from this day you are President of all of us. I salute you and wish you success and much happiness,” reads Clinton’s missive to Bush. “The burdens you now shoulder are great but often exaggerated. The sheer joy of doing what you believe is right is inexpressible. My prayers are with you and your family. Godspeed.” 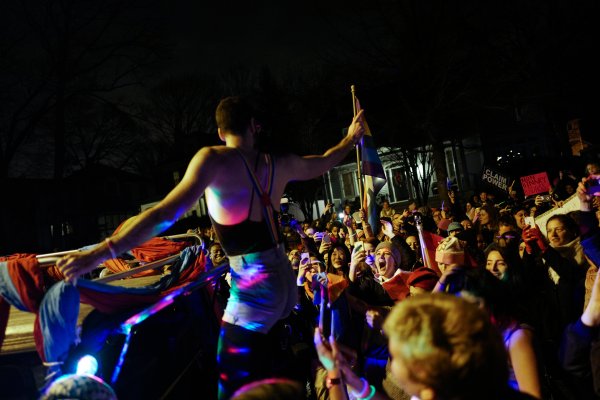 LGBT Activists Have Dance Party by Pence's Home
Next Up: Editor's Pick