With roughly than 45 hours left on his term, President Obama paid one last pilgrimage to the White House briefing room on Wednesday to take questions from the reporters who have accompanied him around the planet for state visits, to golf courses for buddy time and to schools for parent-teacher conferences over the last eight years.

Whether the journalists will have the same access when Donald Trump moves into the White House on Friday is still a nagging question. Obama made a not-even-a-tiny-bit-sly pitch for keeping the correspondents in their cramped White House workspace to document history even as Trump and his team continue to flirt with eviction.

“You’re supposed to cast a critical eye on folks who hold enormous power and make sure that we are accountable to the people who sent us here, and you have done that,” Obama said as he took questions at a news conference for the 165th time as President. “Having you in this building has made this place work better. It keeps us honest. It makes us work harder.”

Trump’s team has signaled that it doesn’t share that view and that old rulebook would not define the relationship with the press. One official called journalists the “opposition party” in a story that triggered a weekend of recriminations between the press and Trump Tower.

Trump has shown open disdain for reporters, dating back to the campaign. He called out specific network correspondents by name, prompting the Secret Service to escort some for their protection. “CNN sucks” was a favorite chant at campaign rallies. Last week, Trump used his press conference to call CNN “fake news.” The Trump team demanded CNN correspondent Jim Acosta apologize to the President-elect for his aggressive attempts to ask a question. The same team also demanded CNN retract a story that later proved to be 100% accurate.

Trump’s move to the White House at the end of the week is unlikely to change any of the 70-year-old billionaire’s tactics. Indeed, Team Trump is considering moving press conferences to another off-site location to accommodate larger crowds. (Trump’s team is correct: the famous Briefing Room can get crowded with people who do not fit into the seven rows of assigned seats. A reporter fainted during Obama’s end-of-2016 session with reporters.)

Trump, who comes to office with no previous elected experience and a team that is new to the White House, campaigned without upholding many of the traditions of the office. For instance, Trump refused to allow reporters to travel aboard his plane, instead sending them on their own aircraft. He also refused to have reporters to chronicle his every movements, as they have during previous campaigns, in case news occurred.

Trump’s team has said it plans to adopt White House protocols when it moves into the White House, and conversations have been an ongoing project for both sides. Part of it is disorganization. Part of it is intentional antagonism.

“They’ve put out a lot of mixed signals about what their intentions actually are,” soon-to-be-former White House press secretary Josh Earnest told reporters Wednesday morning. It was a dry understatement.

The President-elect himself has favored Twitter as his main way to communicate with his supporters and critics alike, bypassing the traditional media. His tweetstorms have gone after civil rights icon John Lewis and actress Meryl Streep, Saturday Night Live and Boeing. The 140-character missives have roiled stock prices, spurred foreign leaders to react and caught even Trump’s own team, including incoming press secretary Sean Spicer, by surprise when they see the boss’ words ricochet around the Internet.

“The President-elect often sends tweets without consulting his team, and that has the potential to put Mr. Spicer in a difficult situation,” Earnest observed.

Spicer himself has spent hours trying to navigate this reality, including a two-hour session over the weekend with the White House Correspondents Association, which represents journalists working at 1600 Pennsylvania Ave. The session ended with détente. (TIME journalist Zeke J. Miller is a board member of that association.)

With an eye on his exit, Obama made public his opinion that journalists should remain underfoot at the White House. “It doesn’t work if we don’t have a well-informed citizenry, and you are the conduit through which they receive the information about what’s taking place in the halls of power,” Obama told reporters. “So America needs you and our democracy needs you. We need you to establish a baseline of facts and evidence that we can use as a starting point for the kind of reasoned and informed debates.”

For sure, Washington is bracing for the new reality show that is coming to televisions. Spicer’s first press briefing is scheduled for Monday and, at least for now, it will be the White House briefing room. “The press went crazy, so I said, ‘Let’s not move it.’ But some people in the press will not be able to get in,” Trump told Fox News on Wednesday.

Obama, who shelved his criticism of Trump after the election ended, has spoken with his successor many times to offer his advice. Even at their first meeting, Obama had this counsel: “This a good rule: Don’t answer any questions when they start yelling at you.”

It’s worth noting that Obama has hardly been the best friend of journalists. Even dating back to Obama’s own transition, the Illinois Democrat sought to circumvent the press where he could. He made policy announcements via social media, he released his State of the Union to the public on Medium instead of giving reporters a preview, and he gave interviews to YouTube celebrities.

Obama’s team has scarcely concealed its disdain for the press has shown glee when picking fights over tactics, too. The hostile press office, especially during election years, sneered at reporters’ interest in politics and process over substance, and former aides have established themselves as kings of a cottage industry of press critics.

More consequentially, Obama used the anti-espionage laws to target reporters’ sources and left the threat of jail hanging over journalists who report on sensitive information. His critics say Obama has done more to stifle journalism than any other President, and his supporters worry they may have given Trump the tools to do far worse.

Obama, who privately finds the press annoying but malleable, spent his penultimate full day as President jostling one last time with the reporters who know him best. The give-and-take was tough, but not unexpected. He answered at length questions about what comes next for him and for the country. He ended with an upbeat note, but embedded in it with a dark undercurrent.

“Thank you very much, press corps,” Obama said as he walked through the sliding door behind the podium. “Good luck.”

With reporting by Maya Rhodan. 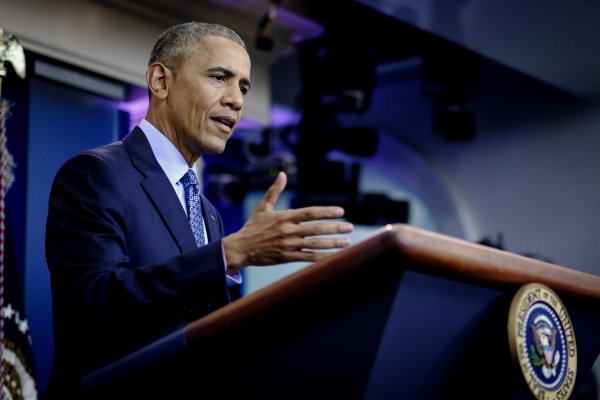 President Obama: Malia and Sasha 'Don't Get Cynical' About Donald Trump's Victory
Next Up: Editor's Pick