Here’s a closer look at a few of those notable moments:

“I think, if I’m understanding your question correctly around proficiency, I would also correlate it to competency and mastery, so that each student is measured according to the advancement they’re making in each subject area,” she told Minnesota Sen. Al Franken .

“This is a subject that has been debated in the education community for years,” Franken said. “It surprises me that you don’t know this issue.”

Franken has argued that growth is a more useful metric because it accounts for individual progress over a period of time. He said it’s a more useful tool for assessing advanced students, who begin at a proficient level already, as well as struggling students, who might not reach proficiency but should make progress compared to their own starting point.

Those on the other side of the debate argue that all students should strive to meet a common level of proficiency.

The Individuals with Disabilities Education Act
DeVos said states should be responsible for deciding whether and how to enforce a federal law that protects the rights of students with disabilities, and she suggested that she didn’t know it was a federal law.

The Individuals with Disabilities Education Act requires schools to provide a free and appropriate education to all students with disabilities, but it has been the subject of disputes over how it should be applied in some states and school districts.

“So were you unaware when I just asked you about the IDEA that it was a federal law?” said New Hampshire Sen. Maggie Hassan, for whom the issue is personal because her son has cerebral palsy.

“I may have confused it.” DeVos said, adding that federal laws must be followed.

School accountability
DeVos dodged a question from Virginia Sen. Tim Kaine about accountability standards across different schools and states. When he asked multiple questions about whether all schools that receive federal funding should be held to equal standards of accountability, DeVos gave the same answer four times, saying only, “I support accountability.”

Visibly frustrated, Kaine asked if she agreed with him that “all schools that receive taxpayer funding should be equally accountable.” DeVos said no, and Kaine interrupted to ask another question before she could explain the reasons for her disagreement.

Gun-free zones around schools
When asked whether she thinks guns have a place in or around schools, DeVos said she would leave that decision up to state and local authorities.

“I will refer back to Sen. [Mike] Enzi and the school that he was talking about in Wapiti, Wyoming. I think probably there, I would imagine that there’s probably a gun in the school to protect from potential grizzlies,” DeVos said, referring to a Wyoming school that has a grizzly bear fence surrounding it. DeVos also said she would support whatever stance the president-elect takes on the issue.

The original question came from Connecticut Sen. Chris Murphy, who has been a vocal proponent of gun control measures since the Sandy Hook elementary school shooting in his home state in 2012. His question referred to Trump’s promise this month that he would eliminate gun-free zones around schools on his first day in office. The Gun-Free School Zones Act, enacted in 1990, bans possession of a firearm in a school zone. But some Republicans and gun rights advocates, including the National Rifle Association, have argued that people should be allowed to carry guns in such zones for self-defense purposes. Kentucky Rep. Thomas Massie introduced a bill earlier this month that would repeal that act. 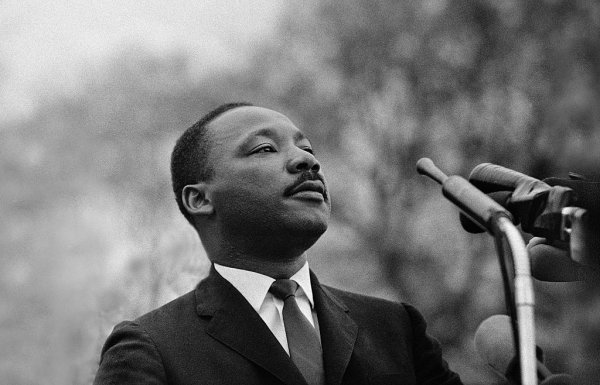