'Nasty Women' Art Shows Rake in Over $50,000 for Planned Parenthood

When Donald Trump called Hillary Clinton “such a nasty woman” during the third presidential debate in October of last year, he probably didn’t think his words would inspire an art show — especially one that has now raised over $50,000 for Planned Parenthood, a non-profit organization the President-elect has said he wants to defund.

The “Nasty Women” art exhibit, an art show which sells “nasty”-related art work priced at $100 or less, raised a whopping $42,500 this past weekend at its Queens, N.Y. location, the Huffington Post reports. Another Nasty Women exhibit in Phoenix raised just over $11,000 during its opening night this past Friday.

According to the exhibition’s website, the show “demonstrates solidarity among artists who identify with being a Nasty Woman in the face of threats to roll back women’s rights, individual rights, and abortion rights.” The proceeds from the exhibition go to Planned Parenthood.

New York-based ceramicist and sculptor Roxanne Jackson was inspired to create the event just the day after the election, the Cut reports. On Nov. 9 of last year, she posted a Facebook status, which read “Hello female artists/curators! Let’s organize a NASTY WOMEN group show!!! Who’s interested???” And within the first hour of posting, Jackson had nearly 300 responses—leading her to team up with curator Jessamyn Fiore and studio manager Carolina Wheat to finalize a logo and website, as well as secure a venue and post a call for submissions, according to the Cut. By the time submissions closed, the team had acquired about 1,000 pieces of artwork.

“This show isn’t necessarily about highlighting individual artists,” Jackson told the Huffington Post. “It’s about female-identifying artists coming together against the Trump regime.”

But with more “Nasty Women” exhibitions scheduled for the next two months, that $50,000 will most likely see an increase: According to the website, there are over 20 other confirmed shows across the U.S. and abroad. 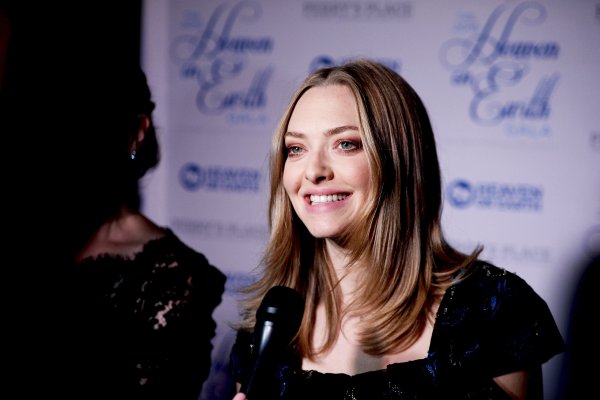 Amanda Seyfried Is So Ready to Become a Mom
Next Up: Editor's Pick