“It started the minute I went online.” Ashley Judd has been on Twitter for six years, and for six years she has endured unrelenting abuse at the hands—the typing fingers, to be specific—of misogynists. It began with those who tried to undermine her voice when she was promoting her 2012 memoir, All That Is Bitter and Sweet. It continued when she considered a run for the U.S. Senate in 2013. But it wasn’t until a cyber mob unleashed a torrent of vitriol, in response to a tweet from the sidelines of a 2015 Kentucky Wildcats basketball game, that she decided to dedicate herself to ending online gender violence.

In a TedTalk delivered at the TedWomen conference in San Francisco last October and premiering online today, Judd refused to sugarcoat the nature of the abuse and its consequences. From threats of death and violence to attacks focused on her status as a survivor of sexual assault and rape, Judd tells TIME, “The creativity and types of ridicule are just astonishing.” After attempts to engage with her abusers, fire back at them with insults and rise above it all, she realized that the solutions lay beyond her own keyboard.

The easiest solution might have been to disappear from the Internet, but she has refused. “I said no. I will not get off social media. I will keep being who I am and using my voice. I have a right to be here and a right to be who I am.”

Judd may feel like she wears a bulls-eye, but she’s not alone. According to a 2015 U.N. report, an estimated 73% of women have endured cyber violence, and women are 27 times more likely than men to be harassed online. In her talk, Judd outlines the consequences of this violence, from the personal to the professional, the economic to the educational. She also cites research that cyber violence is as psychologically damaging as physical violence, particularly when the victim has experienced violence in their past.

However, she acknowledges that not all cyber violence is created equal. “When it is intersectional, it is worse,” she declares in the talk, citing the compounding factors of race, ethnicity, sexual orientation, gender identity and religion. And as a white woman of means and a successful actor with ample resources, Judd knows the support she has in dealing with abuse and practicing self-care—including hiring someone to help scrub her social media feeds—are greater than what most people have at their disposal.

Tangible steps toward eliminating online violence, Judd says, begin with recognizing how many people, victims included, have internalized, and are complicit in, the mechanisms of patriarchy. The ongoing challenge in delineating between free speech and hate speech, in Judd’s estimation, reflects “the hard time we have as a society acknowledging misogyny in general. Those who participate, both male and female, are adamant that it doesn’t exist or it’s something that can’t be addressed, which is merely a way of allowing it to remain entrenched and functional.”

Judd presents a multi-pronged approach to addressing online violence, with work to be done across the technology sector, law enforcement, policy and culture. She emphasizes the need to hold technology companies like Twitter and Facebook accountable for institutionalized sexism and gender exclusion which, she says, “affects the platforms, the reporting mechanisms, the seriousness with which [gender-based violence] is treated.” She demands that laws against gender violence be updated to reflect new technologies that provide new avenues for abuse, and that laws that treat online violence as an extension of in-person violence. She advocates for a gendered lens to digital media literacy for young people and she asks us, individually and as a culture, to believe women when they come forward with reports of harassment and violence.

In today’s data-centric world, a statistic can be as powerful a tool as any in changing hearts and minds. Just as concrete numbers have helped illustrate the wage gap, Judd is hoping they can offer a similar boost to the fight against online harassment. Along with writer and activist Soraya Chemaly, she chairs the Women’s Media Center’s Women’s Speech Project, which gathers data about gender-based online violence and categorizes it in order to develop more targeted solutions. When you can assign a number to the problem, says Judd, “It’s more real, and we are motivated to correct it.”

Many advocates working to curb violence against women see the present moment as a dark one. The impending presidency of President-elect Donald Trump—who has said that sexual assault in the military is a natural consequence of putting men and women together, bragged about how “you can do anything” to women when you’re a star and questioned the motives of the women who accused former Fox News CEO Roger Ailes of sexual harassment—does not feel like a moment of alliance.

But Judd takes comfort in the possibility that sometimes it takes hitting rock bottom before the wheels of change kick into gear. “The more flagrant and outrageous online misogyny becomes—as if it could get any more flagrant and outrageous—the more starkly obvious it becomes that we have to do something. Maybe there is something to the worse it gets, the more quickly we’re going to seize control of this and do the right thing.” 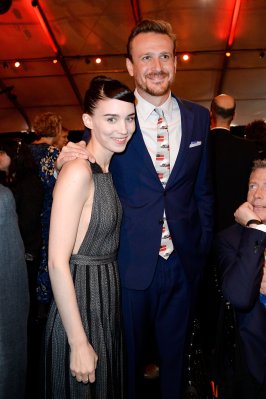 Watch Rooney Mara and Jason Segel in the Delightfully Bizarre Trailer for The Discovery
Next Up: Editor's Pick