China’s President Xi Jinping, also the Communist Party leader, opened the World Economic Forum in Davos today by promoting globalization in what was a clear sign that China is worried how potential trade barriers arising from populist movements in the U.S. and Britain will affect the country’s economic growth, of which exports remain a key component.

Xi was the first Chinese leader to attend the confab of global elites in its four decade history. His attendance alone was a sign of China’s concern. And then he started talking. “There is no point in blaming economic globalization for the world’s problems because that is simply not the case,” he said. “And that will not help to solve the problems.”

“Pursuing protectionism is like locking oneself in a dark room,” he added “While wind and rain may be kept outside, so are light and air … No one will emerge as a winner in a trade war.”

Xi understands global leaders are vulnerable to angry masses, including those in China. The focus of Chinese politics over the past three years has been to consolidate power in the hands of the Communist Party, stamping out pockets of dissent they fear could grow by clamping down on social media critics and putting more dissidents in jail.

In February an outspoken businessman who many in China compared to Donald Trump was silenced online after criticizing the Party (and he was as a Party member himself). Meanwhile, scores of human rights lawyers have been jailed.

Xi portrayed China’s market being open to global companies in his speech. “China will keep its door wide open, and not close it,” he said.

That conflicts with what foreign companies already in China think. Last year, the American Chamber of Commerce in China said more than three-quarters of its members in a survey felt that foreign businesses were less welcome than before in China because of unfair regulations, unclear laws, and Chinese protectionism. Companies from Apple to Qualcomm have recently come under fire from Chinese regulators.

Xi reminded attendees several times about the strength of China’s stable economy, with GDP growth near 7%. But that strength does not prove a Chinese miracle. The growth rate has stayed so clearly consistent because of an unprecedented explosion of government debt over the past year, even more than that during the country’s 2008-09 stimulus. The unease over the domestic economy has driven capital flight, hurting the yuan currency, and cutting China’s foreign reserves to $3 trillion at year’s end from $3.25 trillion to begin 2016.

Xi’s speech was deemed effective by some.

While others were dismissive of it, because of China’s recent history.

Xi visited Davos with a delegation of more than 80 business executives. The message was that China believes in globalization at a time when the rest of the world is doubting it. But it also gave a hint of panic: if trade is diminished with the West, China will have one more crisis tugging at a vulnerable economy. 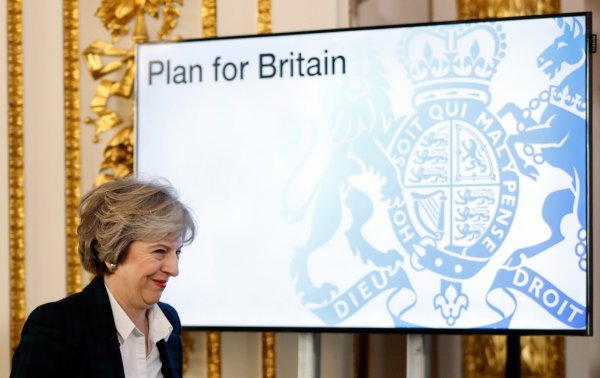 Read Theresa May's Speech Laying Out the U.K's Plan for Brexit
Next Up: Editor's Pick