4 Protests to Know About Before the Women's March on Washington

With hundreds of thousands of counter-inaugural demonstrators expected to march on Washington following Donald Trump’s Inauguration, this weekend’s protesters will be engaging in a longstanding tradition—especially among the American left—of gathering in Washington, D.C., to make their voices heard. Large-scale marches, parades and protests in the nation’s capital can pack additional punch at the time of Presidential Inaugurations, when citizens join together to speak out against the new president and the policies they ran their campaigns on.

Here’s a look back at three past Inauguration Day protests—and another that helped inspire the women and allies march scheduled for Saturday in Washington.

One of the earliest large-scale marches on Washington D.C. was the 1913 Suffrage Parade, when crowds of women demonstrated on March 3, the day before Woodrow Wilson was sworn into office as the 28th president of the United States. That it was called a parade perhaps obfuscates what the 8,000 suffragists experienced that day.

The 1913 march was one of the first major activities planned around gaining women’s suffrage in the United States, and to say that the idea was not yet popular among the mainstream would be an understatement. For their efforts that day, women demonstrators were verbally and physically assaulted by (mostly male) onlookers. There were reports that women were tripped and shoved about by opponents to their cause.

Women would not gain federal voting rights until 1920—and women of color would not be guaranteed the right to vote until decades after that—but the march and specifically the way spectators treated the women activists became a major news story, lending attention and energy to women’s voting rights.

More: Listen to a Suffragist Recall the 1913 March

About a month ahead of Richard Nixon’s first inauguration in 1969, as the left grew increasingly angry about the war in Vietnam, a massive group of anti-war demonstrators marched on the nation’s capital. A small number of protesters threw rocks at Nixon’s limousine and clashed with police, but the demonstration was mostly peaceful. Approximately half a million people showed up to speak out against the Vietnam War, making it the largest anti-war protest in United States history.

Four years later, Protesters staged another massive anti-war demonstration for Nixon’s second inauguration on Jan. 20, 1973, 8 years into the Vietnam war. Approximately 100,000 protesters gathered in Washington D.C. with signs that compared Nixon to Nazis, sang anti-war songs, chanted slogans and, as they had for Nixon’s first inaugural in 1969, threw stones at the president’s limousine. Seven days later, the government announced that the military would stop drafting soldiers to Vietnam.

Like Donald Trump, George W. Bush secured the presidency despite losing the popular vote in 2000. The left, feeling that the White House had been stolen from their candidate on a technicality, staged the largest inaugural protest since Nixon when Bush was sworn in on Jan. 20, 2001. One protester, Mack Wilder, told USA Today that he came specifically because Bush had lost the popular vote: “If he had won clearly, I wouldn’t have troubled to come here.” In impassioned protest fashion, demonstrators gathered in the capitol with anti-Bush signs in toe. Some protesters threw rocks, tomatoes and eggs at the parade route before Bush arrived.

Bush’s second inauguration in 2005 was heavily protested as well. It took place nearly two years after Bush commenced the war in Iraq, a conflict that was deeply resented by many citizens and government officials on the left. Several groups, including left-wing activists and anarchists, marched in Washington, and heard speeches from leftist activists. Some violence broke out at the protest, even between protesting groups. Protesters also staged a die-in in protest of the thousands of lives lost during the war in Iraq.

This one wasn’t tied to an Inauguration, but it played an important role in the history leading up to this Saturday’s planned protest.

The march planned for Jan. 21, 2017, one day following Donald Trump’s inauguration, was initially named the Million Woman March. However, the first Million Woman March took place 20 years earlier in Philadelphia. On Oct. 25, 750,000 black women marched in Pennsylvania to honor both the struggles and successes of black women, as well as to celebrate of African American families.

That march followed just two years after black men organized en masse for the Million Man March in Washington D.C. on Oct. 16, 1995. The men held the march to call attention to issues facing their communities, particularly voter suppression. The women’s march planned to coincide with the Trump inauguration is a direct call-back to these events organized by African-American activists in the 1990s.

Read more about the 2017 Women’s March on Washington and other protest events planned for this week: Here Are Some of the Events Planned to Protest Donald Trump’s Inauguration 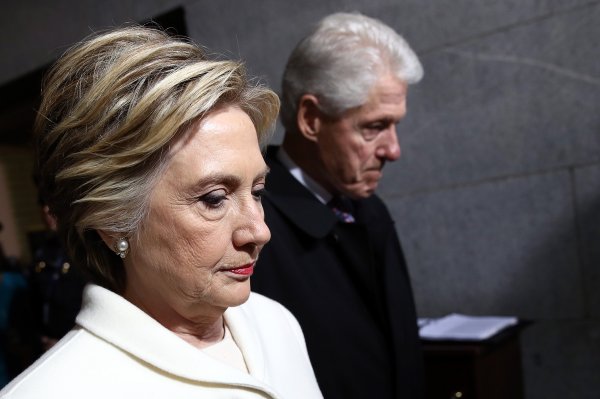 What Hillary Clinton Does Is No Longer Our Concern
Next Up: Editor's Pick