A burly russet-haired male orangutan swings through the trees of Leuser National Park, a massive rainforest habitat in Northern Sumatra, attempting to chase off a band of hikers who have appeared in his section of forest. Not far away, a massive blue-brown peacock caws, seeking out a mate. It is just a few miles of hiking from the base camp of Bukit Lawang, but the Sumatran rainforest buzzes with the sounds of animal life: monkey’s hoots, warbles of tropical birds, the buzzing of insects.

The Leuser ecosystem is the largest intact rainforest in Sumatra, and a UNESCO World Heritage site that is treasured for its extraordinary biodiversity: it’s the only place left on earth where rhinos, elephants, tigers, and orangutans roam in a single forest. Leuser’s international profile was raised last year when Leonardo DiCaprio visited the rainforest and included scenes of Leuser’s forest in his climate-change documentary Before the Flood.

But according to the provincial government’s most recent forest mapping, the Leuser ecosystem doesn’t exist. The Acehnese regional government’s plan for developing the forest does not acknowledge Leuser as a cohesive habitat and earmarks more than half of the ecosystem for potential development, in a stark break from previous government plans for the forest. In late 2016, the Aceh governor’s office even declared its support for a plan by a Turkish energy company, HT Hitay, to build a massive geothermal-energy plant in the heart of the ecosystem — including in parts that are part of protected national park.

“The government’s orientation is towards money, not towards preserving the forest,” says Nurul Ikhsan, an environmentalist with Forest, Nature and Environment of Aceh, a local environmental NGO better known by its stylized Indonesian initials HAkA. “Once major development happens it’s impossible to cancel the effects,” he says, sitting in HAkA’s small office above a pharmacy in Banda Aceh, the regional capital.

Farwiza Farhan, the chairperson of HAkA, stands in front of a map in the office, showing how key paths elephants take through the forest could be disrupted by the intended plant. Her organization, along with a number of other local environmental groups, sued the regional government to rescind its spatial plan for forest development, arguing that it is incompatible with national regulations on forestry maintenance. In late November, a court rejected the suit, though the coalition of local environmental groups has since appealed.

“The question is, Is there a real willingness, a political desire, to protect the forest?” Farwiza asks.

Sumatran Orangutans enjoy their day on the trees of Leuser National Park on May 18, 2016, in Indonesia
Lana Priatna/Barcroft Images/Getty Images

There’s reason to wonder. Indonesia, which has Asia’s largest tract of forest, is destroying its rainforests at one of the fastest rates of any other country in the world. The WWF estimates that well over half of Sumatra Island’s rainforest has been cut down over the past three decades, to make way for hardwood and palm-oil plantations. In 2015, massive man-made forest fires burned down more than 8,000 sq. mi. of rainforest, which led President Joko Widodo to respond with a series of forestry reforms, including a moratorium on new permits for palm-oil plantations.

The only reason Leuser has survived, alone among Sumatra’s large rainforest ecosystems, is because of civil war. For nearly three decades, separatist Islamist rebels in Aceh hid out in the forest in their fight for independence from the national government, making development of the forest impossible. But after the 2004 Indian Ocean tsunami devastated Aceh province, killing around 230,000 Acehnese, the region’s Islamist rebels sued for peace. Beginning in 2005, they left the forest, formed political parties, and began governing the province, which has special autonomy from Jakarta, and is the only province in Indonesia that has established Shari‘a law.

“During the conflict, the historical logging and palm-oil concessions had been abandoned, the forests were actually regenerating quite healthfully,” said Shayne McGrath, an environmentalist from New Zealand who has worked closely with Sumatran environmental organizations for over a decade. “After the tsunami and the peace accords, trees started falling again.”

The destruction is happening quickly. The current governor, Zaini Abdullah, has been panned by local and international environmentalists for failing to protect the rainforest. He disbanded the province’s forest-protection unit immediately after becoming governor, and offered his written support for the development of the Turkish geothermal plant in the center of the ecosystem. (Both the governor’s and vice governor’s campaign teams turned down numerous requests for an interview.) Environmental groups have recorded substantial evidence of forest and peatland destruction in crucial areas of the Leuser ecosystem during Zaini’s term, including in the Tripa swamp region that has one of the worlds’ greatest density of orangutan populations.

Still, local politicians are beginning to speak up about preserving the forest. Irwan Johan, a young reformist politician dressed in a crisp gray suit, who heads the state parliament’s recently created Sustainable Development Caucus, credits local environmentalists with educating him about the importance of protecting Leuser ecosystem. He refers to Leuser as “Aceh’s extraordinary treasure” and has spoken out strongly in the local media against the proposed geothermal plant. But he acknowledges it’s an uphill battle persuading voters and other politicians to embrace forest protection in this underdeveloped province.

“The local communities think, ‘If the geothermal plant is built, every household will have electricity.’ For the communities this [idea] is very positive.”

Regional elections are scheduled for February, and a new governor will almost certainly be sworn in. Aryos Nivada, who leads a politically independent polling operation, says the current governor, who has lost the support of even his own party, is polling in the single digits.

“A lot of it does hinge on the upcoming election. If you can get real leadership in Aceh, it will change the game,” says McGrath.

Some environmentalists have placed their hopes on the complex and colorful former governor Irwandi Yusuf, who is a leading candidate to regain his old seat. Upon taking office in 2007, Irwandi became known as the “green governor,” for placing a moratorium on unauthorized logging and expanding the area of the Leuser ecosystem that was protected from development.

In an interview outside his modest home, Irwandi says that the current governor, Zaini, overturned his efforts to protect his forest. “Every program that had to do with me, he got rid of,” Irwandi says of Zaini.

Irwandi said that if elected, he would review the government’s plans to establish the geothermal plant, protect a greater swath of forest than is allowed for in the current governor’s plan, and revive the forest-protection task force he established. Irwandi mourns what he says is a rise in illegal logging since he left office, and the ecological damage it causes.

“Now if there’s lots of rain, there are floods everywhere. And if there isn’t rain for two weeks, the rivers dry out,” he says.

But his political opponents, as well as environmentalists, point out that Irwandi’s environmental record is far from perfect. Toward the end of his term, he sold rights to develop a small portion of the Leuser ecosystem to developers, a charge Irwandi doesn’t deny. Irwandi said he did this to send a message to international donors who didn’t provide sufficient funds to be paid out as compensation in forest-protection schemes.

“They enjoyed the moratorium on logging, but they didn’t join the effort. How can I be ‘the green governor’ [in that situation]?” he asked.

Irwandi is ahead in the race according to many polls, but elections in Aceh are rarely straightforward. Voter intimidation by former rebels could shift the election to Vice Governor Muzakir Manaf, a more conservative rival, who is backed by the Aceh Party — the main party of the former rebels. After the last election five years ago, where he was defeated in the polls, Irwandi was badly beaten by a group of men believed to support his political rivals.

Farwiza suggests it is unlikely that a leader with an ironclad commitment to protecting the forest will emerge from the possibly messy regional election. 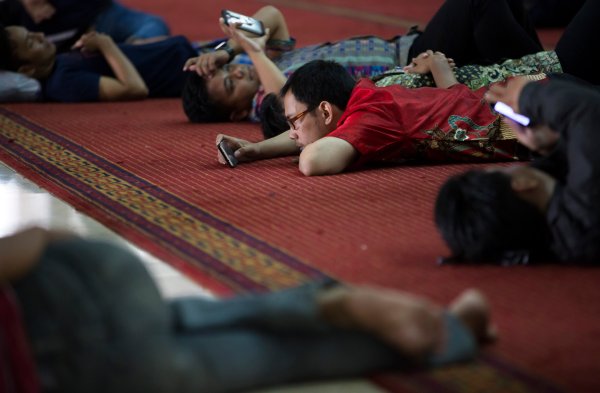 Indonesia's Worsening Problem With Fake News
Next Up: Editor's Pick