50 Years Ago This Week: Worry Over Climate Change Has Already Begun

Illustrated with several pages of color photos, this cover story traced the growing awareness that “belching smokestacks that long symbolized prosperity” were becoming a “source of irritation,” or worse. Though air pollution wasn’t a new phenomenon, it was getting worse as consumption of power increased in the U.S. and around the world, causing “$11 billion a year in property damage alone” and numerous health problems. It was also, the magazine noted, causing a “gradual warming trend” that could “melt the polar ice craps”—a warning that may sound like something meant for today’s readers, not those of 50 years ago. (As the magazine noted, this disaster would at least solve one problem: “Since this would raise ocean levels more than 100 feet, it would effectively drown the smog problems of the world’s coastal cities.”)

What was to be done?

Frank Stead, a high-ranking California state public-health official, thought he knew. It was “clearly evident,” he told TIME, that by 1980 the gasoline engine had to be completely replaced by electric power, and that in order to get there California would have to declare that gas-powered vehicles were banned in the state after 1980. Given that prediction, then, it is perhaps less surprising that TIME struck a somewhat optimistic note about the hope of turning back the tide on pollution and climate change:

Fifty years later, that optimism has proved unwarranted and some of the solutions scientists already knew about back in 1967 are still seen as cutting-edge today.

Developing story: Muhammad Ali—then 25, and still referred to as Cassius Clay despite having announced that he was giving up that name—had informed the Louisville draft board that he spent 90% of his waking hours on his religious vocation, not on fighting, and that he should be entitled to an exemption from the draft. The board disagreed, and as his lawyer filed another appeal, Ali vowed that he would take his case all the way to the Supreme Court. (He would, though not before he was temporarily stripped of his boxing license.)

Harsh words: A review of Sigmund Freud and William C. Bullit’s psychological study of Woodrow Wilson began thus: “It would be hard to find a literary collaboration more ill conceived than this one—a psychoanalytic post-mortem conducted on a U.S. President by two men who were admittedly prejudiced against their subject, and based on second-or third-hand information.”

Regrettable period detail: An article about the growing ease of adopting a child in the U.S. explained that agencies were getting rid of rules that required high incomes, childlessness and youth in prospective adoptive parents. Barriers did, however, remain: “Such states as New York and Massachusetts generally refuse to grant adoptions to couples of mixed religions, or nonbelievers.” (Another point of interest: at the time, the rate of births to unmarried women was 23.4 births per every 1,000 single women, the article noted, explaining that 80% of adopted children fell into that category. In 2014, the rate was 43.9 out of 1,000.)

Great vintage advertisement: What do you get when you combine sports equipment and meat?

Coming up next week: Astronauts 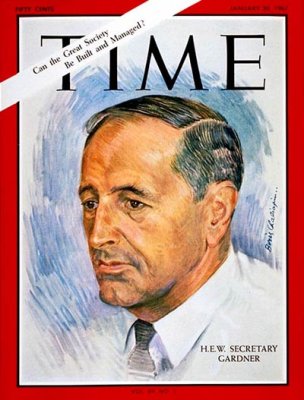 50 Years Ago This Week: The Problem With Building a 'Great Society'
Next Up: Editor's Pick